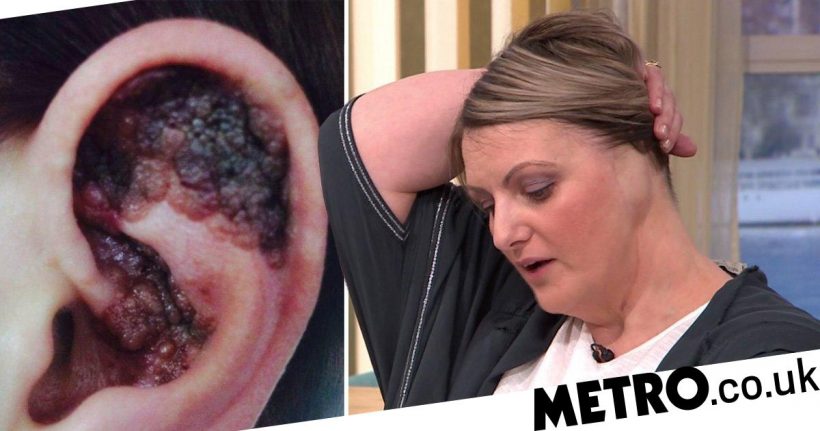 A 44-year-old woman has opened up about how she had to have her ear amputated following a ‘self-inflicted’ melanoma.

Anthea Smith, from Bolton, developed a tanning addition at the age of 14, but was unaware of the serious dangers sunbeds can cause to skin.

She first noticed a strange red spot on her outer ear in 2010, but the mark was dismissed by doctors as a ‘wart.’

Five years later, in 2015, Anthea was referred by a dermatologist to a plastic surgeon for the marks on her ear. By then, the ‘wart’ had transformed into a black and brown growth.

The surgeon proceeded to perform an emergency biopsy and diagnosed the mum-of-two with stage 3C melanoma in July 2015.

The local council worker says she felt like an ‘alien’ following the first op, which left her with an exposed hole in the side of her head. The second procedure took 13 hours and removed her inner ear and middle ear, using skin from her right leg and hip to cover up the wound.

Sadly, the ordeal has left the 44-year-old deaf in one ear and with constant balance issues – which she puts down to her ‘naive’ use of sunbeds.

She told the BBC: ‘I was addicted to having a tan and being tanned. Predominantly it was sunbeds because it was quicker and the results were faster.

‘Nobody should have to live with what I’m living with, all for a tan.’

Melanoma skin cancer is the fifth most common cancer in the UK – according to NHS figures, there are around 16,000 new cases diagnosed each year.

It’s caused by skin cells which have been left to develop abnormally – often as a result of UV light (which is found in sunbeds), but also from sudden sun exposure, the type which often leads to sunburn.

What are the signs of skin cancer?

According to the NHS, ‘the most common sign of melanoma is the appearance of a new mole or a change in an existing mole.’

The mole might be larger than usual, or could be itchy and bleed.

Experts advise to follow the ABCDE model for checking moles. This involves looking to see if a mole is asymmetrical, has blurred borders, has an uneven colour, is larger than larger than 6mm or 1/4 inch in diameter or is elevated on the skin or enlarged. If a mole has any of these things, healthcare professionals advise to get it checked.

If you notice any new moles, or changes to a mole which concern you, it’s always best to book up to see your GP.