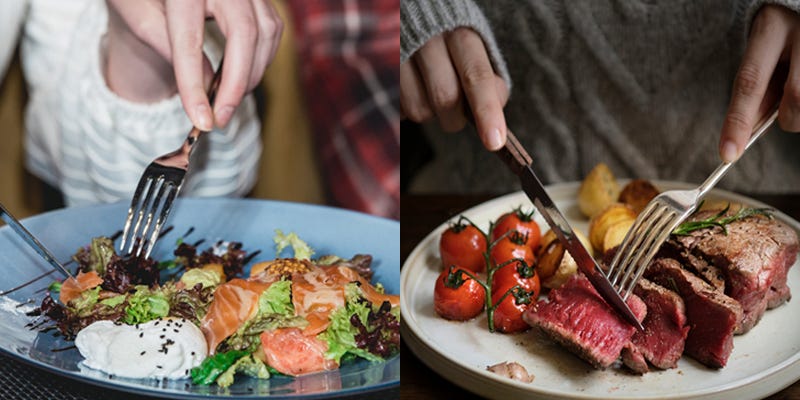 There's even more research to suggest that the best diet is one you can stick to.

Researchers from the University of Otago, New Zealand looked at 250 overweight but otherwise healthy participants assigned to one of three dietary plans: the Mediterranean diet, paleo, or intermittent fasting.

They then compared how well they were able to stick to the diet over the course of 12 months, using a calorie-counting app and daily self-weighing, with each person's weight and body fat, measured at the beginning and the end.

Regardless of the type of diet, only 35–57% of participants were able to stick to the diet for the full year, according to recent study published in the American Journal of Clinical Nutrition.

While all participants showed small amounts of weight loss and body fat by the end of the study, some were more effective than others. Fasting was the diet that delivered the most consistent weight loss for people that could stick to it. But the researchers found it was more of a challenge to maintain than the Mediterranean diet.

The biggest challenge was avoiding refined grains and processed meats

Participants on the Mediterranean diet at lots of fruits, vegetables, whole grains, nuts, seeds, and olive oil, with moderate fish, eggs, poultry, and dairy. They were allowed red meat once a week or less, and a glass of wine daily, but were told to avoid processed food, butter, and sugary drinks.

The study found that about half of the participants on the Mediterranean diet were able to stick to it for a full year.

For those who didn't, researchers found that the problem seemed to be processed foods — only a third of people were able to consistently cut out processed meats and refined grains from their diet. By contrast, most participants didn't have trouble with other elements of the Mediterranean diet, like consuming olive oil, nuts and seeds, and cutting back on red meat.

The Paleo dieters focused on eating whole foods like and fruit and vegetables, too, but also ate plenty of animal products, butter, coconut products, and olive oil. They also ate moderate amounts of nuts, seeds, dairy, and legumes, but limited grains, processed food, and sugar.

Only a third of participants on the Paleo diet were able to stick to it and for the same reasons. The study found Paleo dieters ate more fat and less carbs. They avoided sugary drinks, processed seed oils, and breakfast cereals, as instructed, and also ate enough animal protein. However, many continued to eat grains and sources of sugar. By the end of the study, those on the Paleo diet showed the least weight and fat loss of any of the participants, even if they stuck to the diet.

Fasting was the only diet that showed continuous weight loss, but participants had difficulty restricting calories

Those on intermittent fasting (IF) diet were allowed to eat what they wanted five days of the week, but on the other two days were severely limited in how many calories they could consume — 600 a day for men, 500 for women. They weren't limited in the types of food they could eat on those days, but were encouraged to eat high protein foods with low-carb vegetables and greens to feel fuller.

Researchers found participants on the intermittent fasting diet were the only ones to lose weight continuously throughout the 12-month period. Those on other diets had lost weight at six months, but plateaued.

During the fasts, however, participants ate fewer calories, but consistently over-estimated, and had difficulty staying below just 500-600 calories a day. Some 54% of them stuck with it for the full year.

The Mediterranean diet was best for overall benefits and sustainability, researchers found

Although the Mediterranean diet had the highest number of participants after a year, that still only amounted to 57% of people who initially began the diet. This confirms previous research that diets can be hard to stick to over time.

However, those who followed the Mediterranean diet even imperfectly had better measures of blood pressure and glycemic control, suggesting there are benefits to even moderate changes in eating habits, researchers concluded.

The Mediterranean diet was previously named the overall best diet for 2020 by US News and World Report, for the third year in a row, in part because it was deemed more sustainable than "crash" diets like the Whole30 that eliminate entire food groups.

Gwyneth Paltrow claims she shaved 1.7 years off her biological clock by changing her diet

The Mediterranean diet is named the best diet for 2020, and keto remains one of the worst

'Intuitive eating' is on the rise, and experts say it's because people are fed up with diet culture