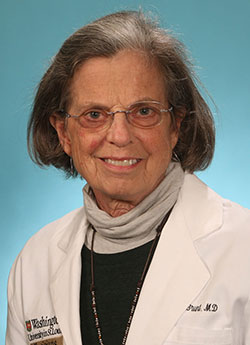 Elizabeth M. Brunt, MD, a professor emeritus of pathology and immunology at Washington University School of Medicine in St. Louis, has received a Lifetime Achievement Award for Contributions to Liver Pathology from the Hans Popper Hepatopathology Society.

Brunt’s research has focused on nonalcoholic fatty liver disease, a common condition that can lead to end-stage liver damage. She developed a scoring system based on microscopic evaluation of liver biopsy samples to assess the severity of nonalcoholic steatohepatitis, the form of the disease that can progress to scarring and liver failure. The system came to be known as “the Brunt criteria.” She subsequently co-led an effort to develop pathology scoring that continues to be used worldwide in clinical trials for nonalcoholic steatohepatitis.

Brunt also studies the development of liver cancer in people with and without scarring, or cirrhosis, of the liver. She co-led an international team that defined the criteria for an unusual form of liver cancer so that epidemiologic and clinical studies of the condition could be better studied across countries.

She joined the faculty of the School of Medicine in 1987 as an instructor in pathology. She left in 1991, but rejoined the school in 2007 as a professor and chief of the liver and GI pathology section. She retired as an emeritus professor in 2015.