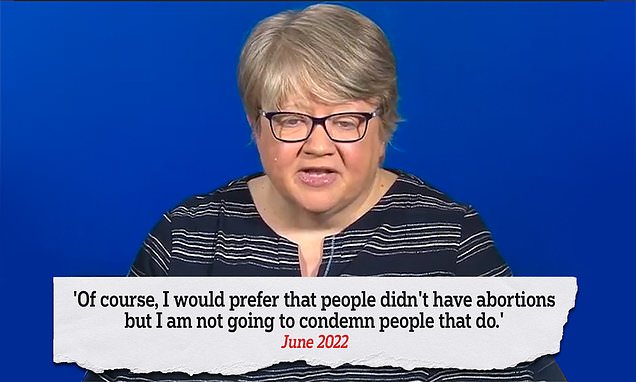 Therese Coffey claims she WON’T seek to change abortion laws: New Catholic Health Secretary faces backlash over her ‘deeply concerning’ views… as she insists she is a ‘complete democrat’

Therese Coffey today insisted she won’t use her new powers as Health Secretary to ban abortions.

A devout Catholic, the 50-year-old publicly stated she would prefer women ‘did not have abortions’ in the wake of the landmark overturning of the Roe V Wade ruling in the US that safeguarded women’s right to an abortion.

The former Secretary of Work and Pensions previously voted against making at-home termination pills permanently available and didn’t back a motion to grant women in Northern Ireland abortion rights.

But when grilled about her controversial outlook, Dr Coffey denied she would abuse her position to change the rules. 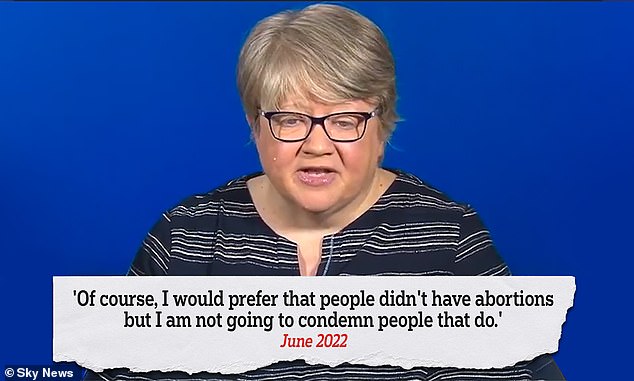 A devout Catholic, Therese Coffey publicly stated she would prefer women ‘did not have abortions’ in the wake of the landmark Roe V Wade ruling in the US that safeguarded women’s right to an abortion

The current Work and Pensions Secretary, who is a qualified chemist, has earned a reputation in Westminster as a ‘workhorse’ thanks to her scientific attention to detail and willingness to work long hours.

Those qualities will be crucial in her new role where she faces a mammoth in-tray that includes clearing record NHS backlogs, fending off strikes and addressing the deadly crisis in A&E and ambulance services.

Her appointment highlights how Ms Truss views fixing the NHS as a key priority leading up to what is expected to be a closely fought 2024 General Election.

Ms Coffey, 50, will become the third Health Secretary in as many months when she takes over from the interim post-holder Steve Barclay, a staunch Boris supporter, and Sajid Javid, who quit in protest against Mr Johnson’s premiership in July.

She comes into the role as 6.7million patients in England languish on NHS waiting lists for routine operations such as knee replacements and cataracts surgery, often in pain. The queue is expected to keep growing for the next two years as people come forward for treatment after delays during the pandemic.

In her first day in charge of the Department of Health and Social Care, she was asked on Sky News whether she personally supported abortion.

She said: ‘I’m conscious I have voted against abortion laws.

‘What I will say is I’m the complete democrat, and that is done so it’s not that I’m seeking to undo any aspects of abortion laws.’

Dr Coffey, who has a PhD in chemistry, previously brought a motion before parliament which called for women seeking an abortion to undergo a ‘mental health assessment’.

She has also voted against same-sex marriage, including among armed forces personnel and in Northern Ireland.

The new Health Secretary also failed to back a bill that would permit terminally ill people to lawfully be allowed to end their life with consent from the High Court.

Ms Coffey sparked fury in June after her stance on abortions made headlines following an interview with Sky News in response to the June US Supreme Court decision. It overturned the 1973 Roe v Wade judgment, which ruled woman’s right an abortion was protected by the constitution.

The ruling sparked concerns that a similar push back would be made in the UK.

However, Dr Coffey told Sky News that ‘abortion law isn’t going to change in this country’.

She was asked whether she agreed with the new Business Secretary Jacob Rees Mogg’s view that the UK’s abortion rate is ‘one of the saddest aspects of British modern life’.

Dr Coffey said: ‘In a broad variety of ways, of course I would prefer if people didn’t have abortions but I’m not going to condemn people that do.’

Asked whether the right to an abortion should be enshrined in British law, she said: ‘We don’t need it because we already have legislation that provides access to abortion.’

Dr Coffey has signalled her stance on abortion for over a decade.

In a 2010 motion when she was a backbench MP, Dr Coffey called on the Government to give its ‘full backing to mental health assessments for women presenting for abortion’.

She also urged ministers to back plans to tell women about their risks to their mental health if they terminate their pregnancy.

Dr Coffey has also voted against extending the right to terminate pregnancy to women in Northern Ireland. She argued that her vote reflected her belief that the UK Parliament should not directly rule on the issue.

In March, Dr Coffey voted against making the abortion ‘pills by post’ policy permanent. However, most MPs backed the move so women in England and Wales can receive abortion pills in the mail from September.

The move was brought in temporarily amid the Covid crisis and allowed women to take two pills at home, provided they were not more than 10 weeks pregnant. More than 150,000 woman have used the service since it was brought in.

Clare Murphy, chief executive of the British Pregnancy Advisory Service (BPAS), told the BBC that while politicians can have a personal stance on abortion, these should not ‘stand in the way of women’s ability to act on their own.’

Dr Coffey’s vote against at-home abortion pills was ‘against the advice of leading medical bodies including Royal College of Obstetricians and Gynaecologists, the Royal College of Midwives and the BMA’, Ms Murphy said.

She added: ‘To have a health secretary who would place their personal beliefs above expert clinical guidance is deeply concerning.’

‘Anti-abortion protest activity is escalating, with women and clinic staff facing intimidation while seeking to access and provide an NHS-funded service.

‘Every week, women with complex medical conditions are forced to continue pregnancies against their will because of a lack of appointments within NHS hospital settings.

‘We need a health secretary who wants to improve access to a medical procedure that one in three women will need in their lifetime, not impose further restrictions.’