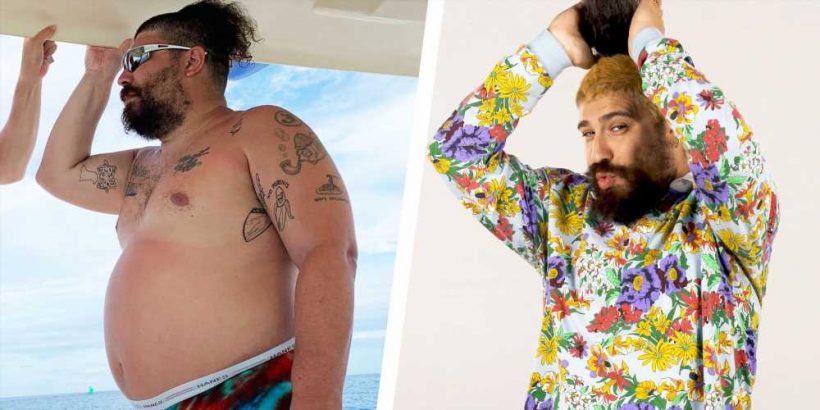 You wouldn’t think that someone who calls himself “The Fat Jewish,” would be motivated to lose weight.

“I like being thick. It’s a part of my brand,” commentator Joshua Ostrovsky (@The Fat Jewish) tells Men’s Health.

Ostrovsky is the co-founder of Babe Wine and recently appeared in Uncut Gems. He initially garnered fame by posting funny memes to his Instagram account, The Fat Jewish.

“I used to live life like an unmonitored 12-year-old at a sleepover,” he says. “I just ate what I wanted. I never looked at a label.”

Although he embraced his size, Ostrovsky says his weight held him back at times. The 37-year-old attempted to go zip lining in Florida, but was told by the adventure company that he was too heavy.

Then in July 2019, an unflattering tagged photo of Ostrovsky taken during a Bermuda vacation prompted the influencer to make a change. At the time, he weighed 300 pounds.

“I was just on the boat, and i’m wearing like a Speedo—as I always do—and I was like, ‘I don’t love the way I look in this photo,'” he says. “I think that’s the way it happens for a lot of people.”

Initially, Ostrovsky tried methods used by fitness influencers. He recalls beating a monster truck tire with a sledge hammer at a trendy gym. The online personality even resorted to a Sriracha, hot water, and cracked pepper cleanse. Unsurprisingly, neither provided results.

In July, Ostrovsky was inspired to join WW, because it helped his mother-in-law lose weight. Now, he is a paid spokesperson, or WW ambassador, with the company.

Ostrovsky signed up and follows the blue program, meaning he gets to eat his pick of 200 foods that contain zero points. Foods outside this list are given a specific point value and are deducted from a user’s daily point allowance.

“People think of it as being kinda dusty,” he says. “Everything is now in the app. It’s super cutting edge.”

Whereas The Fat Jewish previously consumed Alfredo sauce like it was soup, he now actually eats some vegetables.

Ostrovsky scans products using the WW app while grocery shopping to determine their points value and whips up three-point bagels with his wife. He chooses cauliflower gnocchi instead of the real deal.

“Everything is made out of cauliflower now. You can live your dreams on cauliflower in 2020,” he says.

Ostrovsky was most surprised that losing weight wasn’t as hard as he imagined.

“I thought it was going to be some crazy insane journey. Honestly, once I discovered WW the journey wasn’t that bad,” he says. “It wasn’t like I woke up every day and was like, ‘Rise and grind. Time to get after it.’ I basically just lived my life.”

He says the key was learning to make smarter choices.

Although his meals vary, Ostrovsky typically starts his day with a veggie omelette. Lunch is generally salad, because heavier meals make him feel sluggish.

When dining out, Ostrovsky tends to pick grilled fish over higher calorie meals. If he’s meeting friends for dinner, Ostrovsky eats sensibly during the day so he has plenty of points to order what he really wants at the restaurant.

In terms of the gym, the New Yorker gets on an elliptical for 30 minutes twice a week.

“There was never any goal. As long as I’m feeling good, I kind of just roll with that. I think it’s about feeling fire,” he explains. “Now I have to figure out what to do with my brand.”