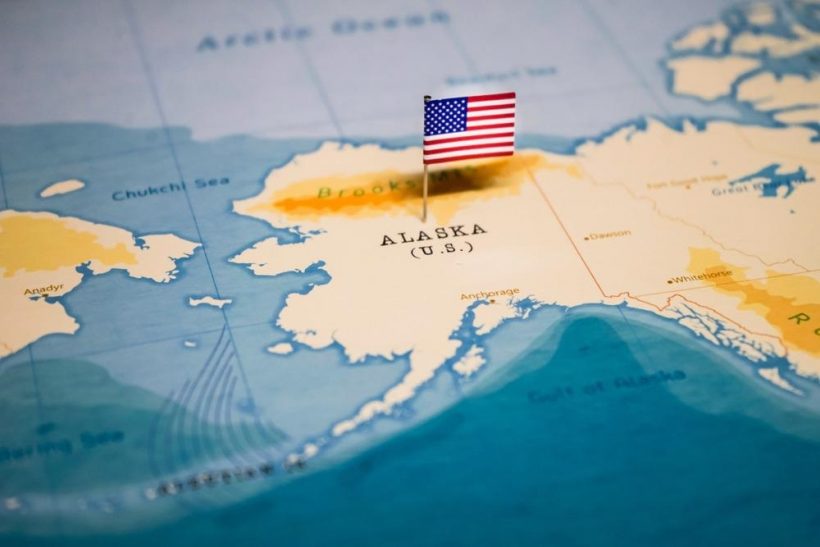 Since the onset of the coronavirus disease 2019 (COVID-19) pandemic, the genomic evolution of the severe acute respiratory syndrome coronavirus 2 (SARS-CoV-2) has been widely reported. Owing to genomic mutations, several SARS-CoV-2 variants have emerged and have been categorized as variants of concern (VOC) and variants of interest (VOI) by the World Health Organization (WHO) in accordance with their transmissibility, capability to escape immune responses, and virulence. 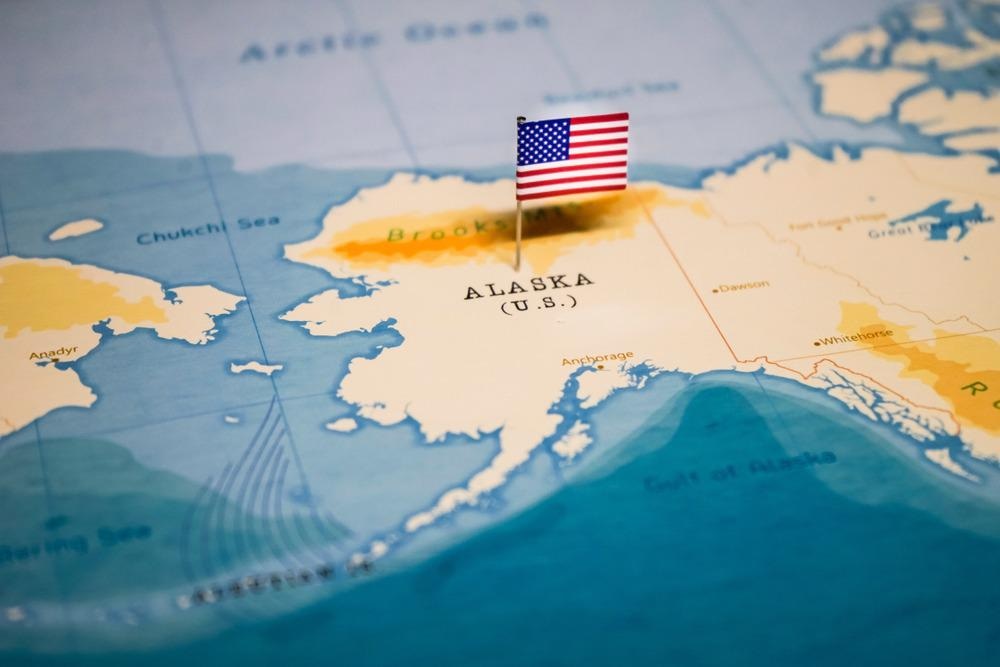 Certain SARS-CoV-2 variants, especially VOCs, have reduced the efficacy of available COVID-19 vaccines; thus, their circulation has increased infection rates globally. Similar to many regions across the world, Alaska experienced an increased spread of the SARS-CoV-2 Alpha (B.1.1.7) variant between the end of 2020 and early 2021. Alaska is considered a distinct state within the United States as a result of its large size, uniquely diverse and dense population, and physical distance from the contiguous United States.

Unlike other contiguous regions of the United States, Alaska was predominantly impacted by the B.1.1.519 lineage throughout early 2021. During the same period, researchers observed 77.9% of B.1.1.51 prevalence in Alaska as compared to 4.9% throughout other contiguous U.S. states. This finding indicates a B.1.1.519 founder event in Alaska.

Although initially Alaska and other U.S. states exhibited differential patterns associated with dominantly circulating SARS-CoV-2 variants, both regions eventually exhibited a similar pattern during the Delta- and Omicron-dominant waves. Although the incidence of the Omicron variant in Alaska and other U.S. states was similar, the emergence of sublineages within the larger variant classification was different.

Several studies have indicated that Omicron sublineages exhibit a significant divergence that impacts immune responses. These sublineages present the risk of recurrent infections, which could prolong the COVID-19 pandemic.

A new study published on the medRxiv* preprint server assesses the pattern of SARS-CoV-2 variant emergence across Alaska. The Omicron sublineage reported in the current study, BA.2.3, contains several mutations including L140F in the open reading frame (ORF3a) protein, as well as A2909V in ORF1a. These mutations are responsible for the variant’s capacity to evade immune responses and increased replication rate.

In this study, researchers obtained genomic sequences from the Global Initiative on Sharing All Influenza Data (GISAID) to study the pattern of incidence and transmission of the Omicron sublineage BA.2.3, which is also known as B.1.1.529.2.3, in Alaska. Herein, the scientists compared this pattern with the SARS-CoV-2 emergence pattern associated with the ‘the Lower’, which refers to states within the contiguous U.S., as well as other major U.S. states including New York, California, and Washington.

A higher prevalence of the Omicron lineage BA.2.3 was reported in Alaska as compared to the Lower. To investigate the emergence pattern, scientists determined the date of first detection and incidence of BA.2.3 in both regions.

To this end, the researchers observed that the Omicron variant was first reported from the Anchorage-Mat Su region of Alaska, which is a densely populated area on December 19, 2021. Soon after its incidence, this variant replaced the pre-existing Delta variant and became the dominantly circulating strain in both Alaska and the Lower.

By January 16, 2022, although the Lower region exhibited a 0.2% of prevalence of BA.2, Alaska showed no such prevalence. During the same period, Alaska reported a 2.7% incidence of the sublineage BA.2.3 (2.7%), which is comparable to the 0.1% prevalence reported in the Lower. 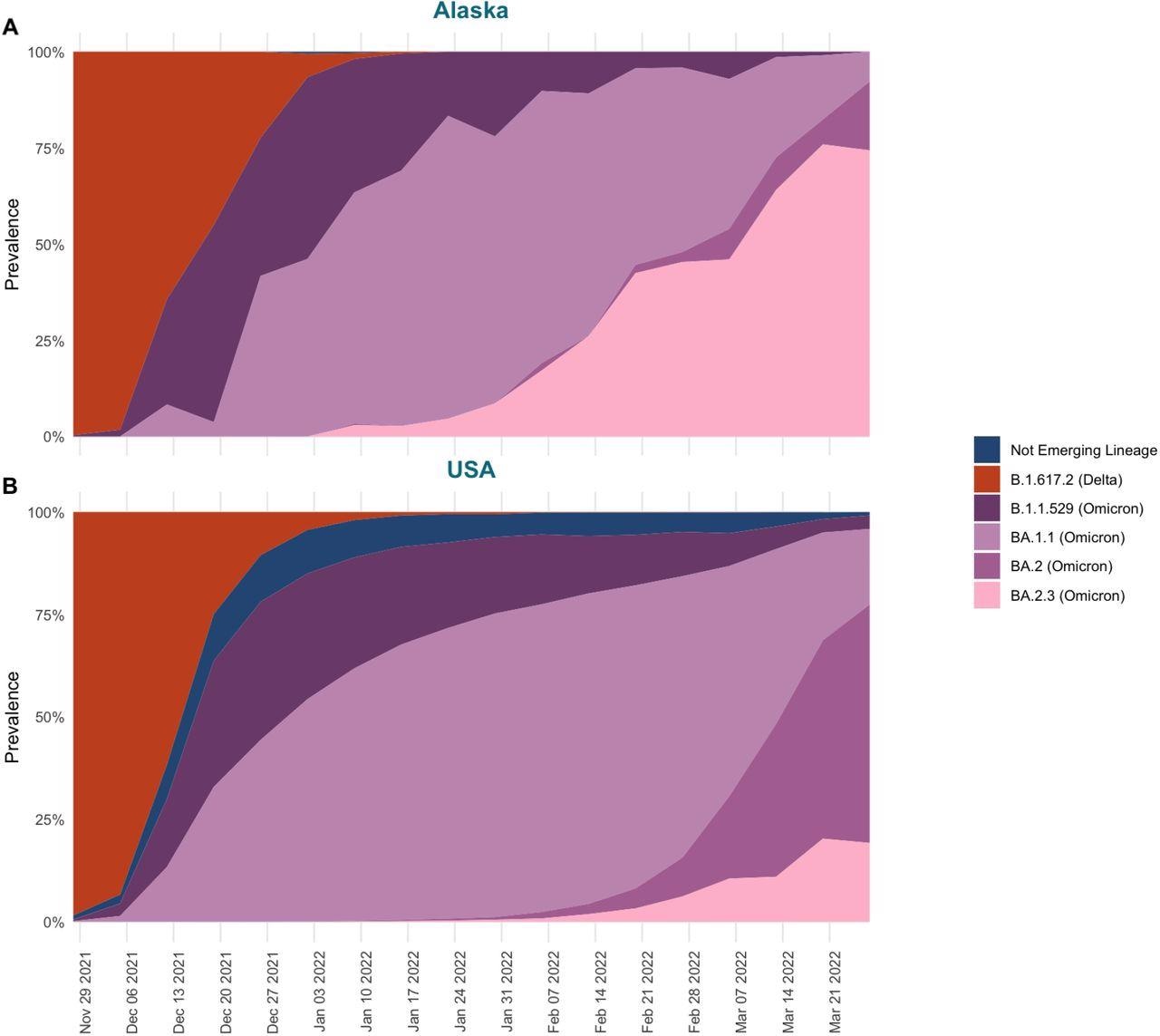 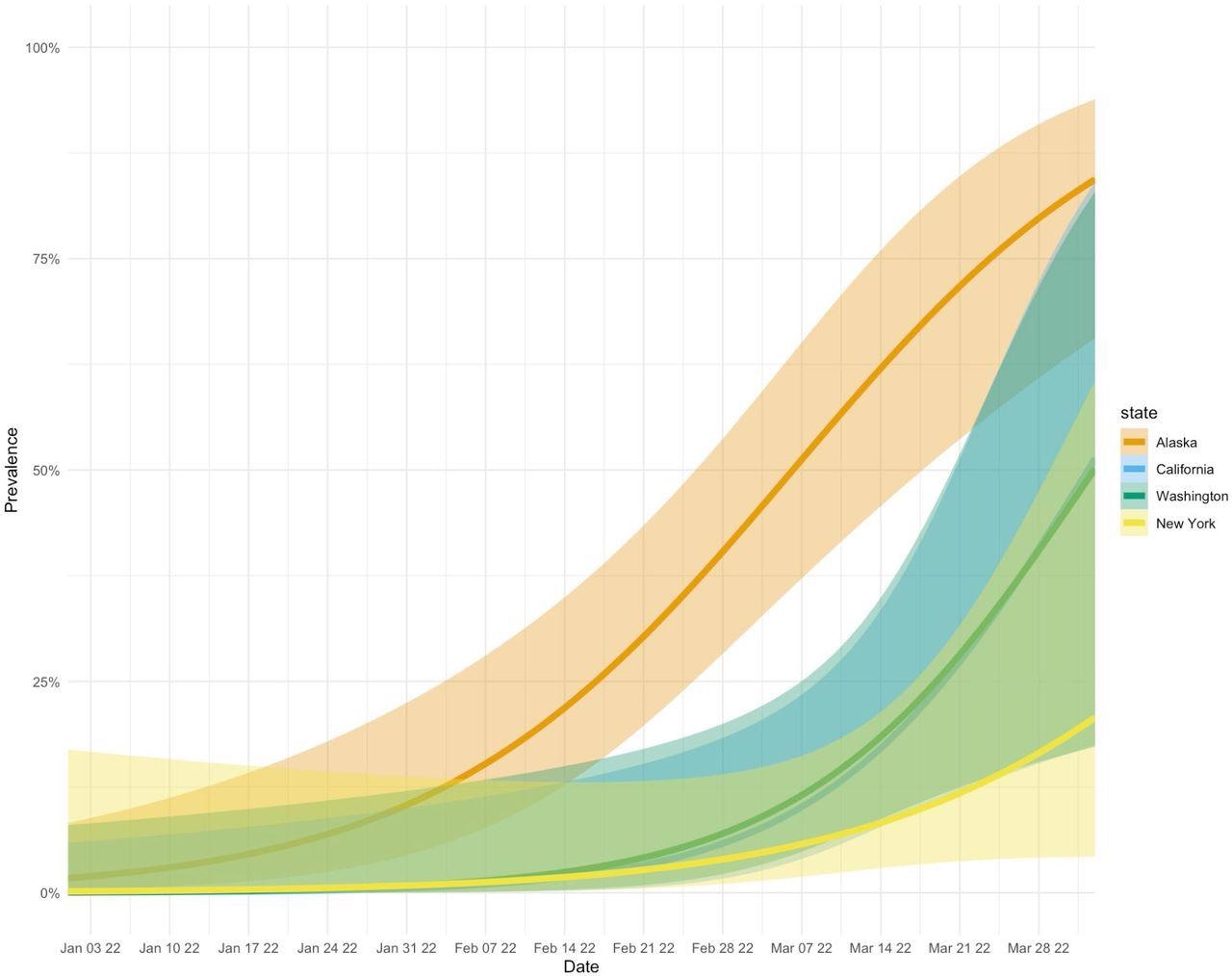 The percent of sequences by week (estimated prevalence) belonging to BA.2.3 colored by states including Alaska, California, New York, and Washington detected from 2021-11-28 to 2022-04-03.

Alaska contains six economic regions defined by the U.S. Department of Labor and Workforce Development, which included the Southwest, Anchorage-Mat Su, Gulf Coast, Interior, Southeast, and Northern regions. Model studies have shown that among the economic regions of Alaska, the Gulf Coast recorded the earliest detection of the BA.2.3., which ultimately became the dominant circulating strain of the region.

In the current study, the GISAID repository was used to demonstrate the distinct emergence and transmission patterns of the SARS-CoV-2 Omicron BA.2.3 sublineage in Alaska as compared to the Lower and other regions of the U.S. Herein, researchers report the potential ancestral origins of BA.2.3 cases in Alaska and its spread across the economic region of the state. The unique location of Alaska might influence the emergence of distinct SARS-CoV-2 variants.

medRxiv publishes preliminary scientific reports that are not peer-reviewed and, therefore, should not be regarded as conclusive, guide clinical practice/health-related behavior, or treated as established information.

Priyom holds a Ph.D. in Plant Biology and Biotechnology from the University of Madras, India. She is an active researcher and an experienced science writer. Priyom has also co-authored several original research articles that have been published in reputed peer-reviewed journals. She is also an avid reader and an amateur photographer.