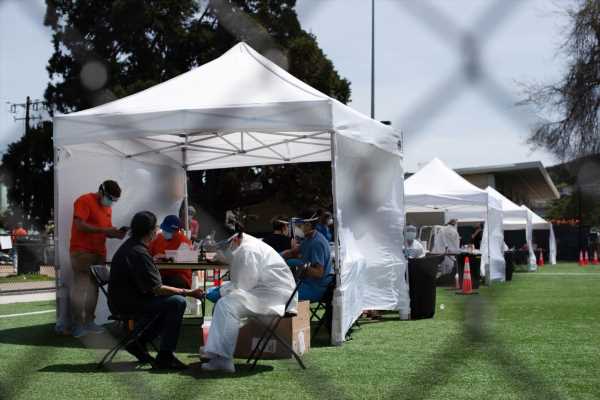 A COVID-19 mass testing effort within San Francisco’s Mission District  — which aimed to broadly test individuals regardless of symptoms  — found stark inequalities in how the virus is affecting different groups. About 95% of the people who tested positive were Latino, and the vast majority could not work from home. Not a single white person tested positive, despite making up about a third of the people who were tested.

The findings highlight just how hard it is to avoid the virus if you cannot shelter in place or work from home.

Overall, about 2% of residents and workers who participated in the study in late April tested positive for the disease. Only about half of those who tested positive reported having symptoms of COVID-19.

The findings suggest that “active infections are not evenly distributed across the community,” study researcher Dr. Diane Havlir, a professor of medicine and chief of the HIV/AIDS Division at the University of California, San Francisco, said in a news briefing on Monday (May 4). Low-wage essential workers in the Latino community were most affected, she said. Many of those people worked in construction or in the food and beverage industry, according to the study.

“Hopefully, with this data we can respond and start putting resources to work towards more equity in supporting this highly impacted community,” Havlir said in a statement.

The study focused on a particularly densely populated census tract in the Mission District, which has 5,700 residents, about 58% percent of whom are Latino.

Among the 2,959 residents and workers, 2.1% tested positive for COVID-19. Those who worked in the census tract, but didn’t live there, were even more likely to test positive, with 6.1% of workers testing positive versus 1.4% of residents.

Among those living in the blocks nearby (but not officially in the census tract), 1.4% tested positive.

The overwhelming majority of those who tested positive were Latino, and 75% were men.

In addition, about 89% of those who tested positive made less than $50,000 a year, even though this group made up just 39% of the overall sample.

“The virus exploits preexisting vulnerabilities in our society,” Havlir said. “Our community-based screening study emphasizes how high infection risk continues to be for this population.”

Related: Can antibody tests tell if you’re immune to COVID-19?

Among those who tested positive, only 47% reported symptoms, including cough, muscle aches and fever, while the rest reported no symptoms.

The findings have limitations. The researchers tested only an estimated 55% of residents of the census tract. Some residents may have avoided testing due to fear of needing to isolate or quarantine, fear of being tracked by government agencies, or fear of negative impact on local businesses if the neighborhood were to be labeled as a COVID-19 hotspot, Havlir said.

It’s unclear how well the findings translate to the San Francisco population as a whole, although the researchers suspect that infection rates are higher in this area due to socioeconomic factors that contribute to the spread of the virus (such as those with lower incomes needing to work outside the home and sharing households with more members.)

However, “the findings here don’t mean that the Mission is a less safe place to be than anywhere else,” said Dr. Susan Philip, director of Disease Prevention and Control for San Francisco Department of Public Health. Everyone needs to take precautions, including social distancing, to reduce the spread of the virus.

The researchers plan to conduct repeat COVID-19 testing in this same census tract in three month and again in six months, which will help researchers assess whether interventions to reduce the spread are working. The researchers also hope to expand this mass testing to other San Francisco neighborhoods.

The team also conducted antibody testing, which show a past infection with COVID-19, but those results won’t be available for a few more weeks.

The Mission screening project, known as Unidos En Salud, is a partnership between Mission community organizers in the Latino Task Force for COVID-19, UCSF researchers, the City and County of San Francisco, and the San Francisco Department of Public Health (DPH).