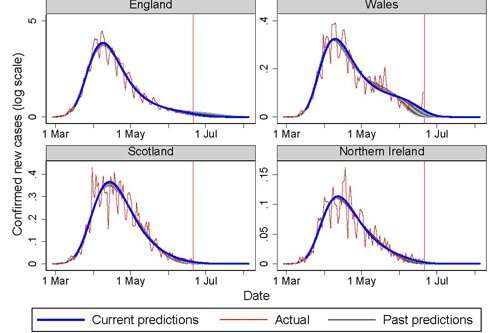 A new study from City, University of London predicts that the first wave of COVID-19 cases in England will drop to zero in late July or early August.

The study, “The COVID-19 epidemic in the UK,” led by Dr. Giulia Faggio, Senior Lecturer in Economics and Professor Franco Peracchi from Georgetown University, estimates that England will be void of coronavirus cases between the 10th July and 6th August, with Wales, Scotland and Northern Ireland reaching zero before then.

Using real-time data published by Public Health England (PHE) and the Department of Health and Social Care (DHSC), Dr. Faggio created a model which analyzes trends in the COVID-19 case numbers which are released in the government daily figures.

Dr. Faggio then examined how the daily coronavirus figures had been changing over the past weeks and months to calculate the average fall and predict the trajectory of the virus over the next 45 days.

“According to the latest estimates, all four UK nations will reach the end of the first phase of the epidemic between late June and early August and within a few days from each other,” said Dr. Faggio.

“Past and current predictions suggest that England might be the last nation to reach the end of this first phase,” she continued.

Real-time data with a changing estimation

There have been over 300,000 coronavirus cases in the UK and government figures suggest that around 1,200 are being diagnosed each day.

UK coronavirus cases peaked with 6,201 diagnosed cases on 1 May.

With those figures, Dr. Faggio’s research also takes into account the five pillar testing plan that the UK government set out in March—focusing on the first two pillars which track both NHS and commercial testing.

“The model uses real-time data which I input every other day when the daily figures are released, so there is some uncertainty on this end date,” Dr. Faggio added.

She continued saying, “we also see that the figures are constantly being revised when new data becomes available, so that will alter the models estimation.”

In building the model, Dr. Faggio worked with Professor Peracchi who had previously tracked the spread of the virus in Italy. Using his model she compared the empirical evidence which helped base her predictions about the number of UK cases.

Dr. Faggio said: “The most recent evidence presented in this note suggests that the number of confirmed new cases in the UK is falling at a faster pace than before.