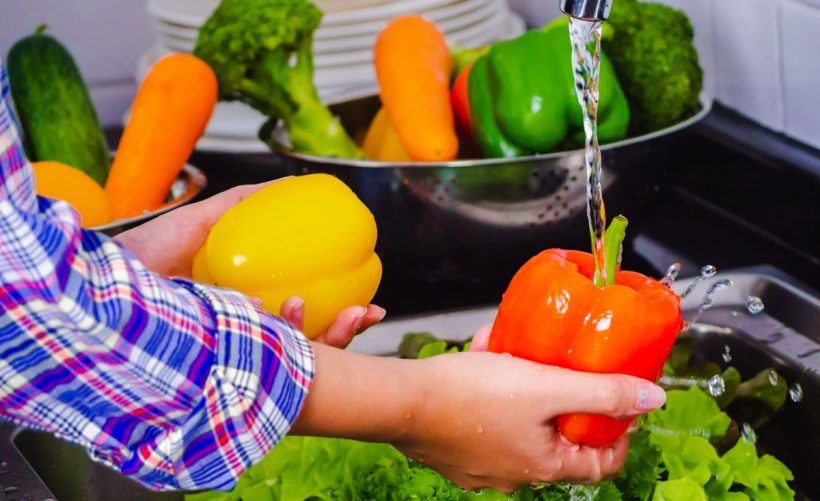 Despite what a doctor in a viral video suggests, it’s not a good idea to wash fruits and vegetables with soap and water, even during the COVID-19 pandemic, food scientists told Live Science.

“We’ve known for 60 years that there are toxicity issues about consuming household dish soaps,” Benjamin Chapman, a professor and food safety specialist at North Carolina State University, told Live Science. “Drinking dish soap or eating it can lead to nausea, can lead to [an] upset stomach. It’s not a compound that our stomach is really built to deal with.”

Instead, people should wash produce as they normally would, with cold water, Chapman said.

Dr. Jeffrey VanWingen, who works in private practice as a family doctor in Grand Rapids, Michigan, posted the video to YouTube on March 24. Since then, it’s been seen about 16.5 million times.

“I felt an urgency to get the word out to people that despite the stay-at-home order [in Michigan], we need to use caution when we go out,” VanWingen told Live Science. “That’s really the most important piece of the message: If you don’t have to go out, don’t. But if you must, to get food, do so with caution.”

In the video, he advises people to spend as little time in the grocery store as possible, to wipe down shopping carts with disinfectant, and to go shopping for those older than 60 years old, as they might have a higher risk for severe illness from COVID-19, according to the Centers for Prevention and Disease Control (CDC).

But other advice VanWingen gives is less scientifically sound. For instance, VanWingen advises people to keep new groceries in a garage or porch for at least three days, if possible. (Later, in his interview with Live Science, VanWingen said this didn’t apply to refrigerated or frozen goods.) Then, VanWingen suggests that containers bought at the store be disinfected or discarded.

A recent study in the New England Journal of Medicine suggested that the virus could stay on cardboard for 24 hours and plastic and stainless steel for 72 hours, although the overall concentration fell significantly by that time. But the practice of quarantining and then sanitizing food containers before putting them in the refrigerator or pantry isn’t necessary, Chapman said.

“We don’t have any evidence that food or food packaging are transmission vehicles for coronavirus,” Chapman said.

As for VanWingen’s disinfecting suggestion, “it’s not based on any science,” Chapman said. A better way to handle new groceries is to put them away and then wash your hands with soap and water, or use hand sanitizer, Chapman said. “It’s not to say that washing my hands is magical, but it’s as effective as what he’s suggesting.”

Hand cleaning is key, said Donald Schaffner, a specialist in food science and a distinguished professor at Rutgers University in New Jersey. You should clean your hands after returning from the store. “And if you’re still feeling worried after you put all your groceries away, wash your hands and/or use hand sanitizer,” he said. Also, clean your hands before preparing a meal and before eating.

“You know what? That was good advice even before the pandemic,” Schaffner said. “And it’s going to be good advice after the pandemic, too.” (Schaffner expands on these ideas in his Twitter thread about VanWingen’s video.)

As for people concerned about food packaging harboring the virus, “I get it,” Schaffner said. “But here’s the thing, it’s probably not on food. And even if it is on food, it’s not going to make you sick from eating that food.”

As Chapman told Live Science in a previous interview, in theory, coronaviruses do not survive well in the very acidic stomach.

In the video, VanWingen suggests pre-soaking produce in soapy water and then washing it with soap for 20 seconds. But doing this could lead to health problems, such as mild gastrointestinal irritation with nausea, vomiting, diarrhea and abdominal pain. That’s because produce is porous, so it can absorb soap, Chapman said.

“Consumers should not wash fruits and vegetables with detergent or soap,” according to the U.S. Department of Agriculture (USDA). “These products are not approved or labeled by the U.S. Food and Drug Administration (FDA) for use on foods. You could ingest residues from soap or detergent absorbed on the produce.”

Although not mentioned in the video, the internet is rampant with other unscientific advice, such as using a dilute bleach solution, lemon juice or vinegar to wash produce during the COVID-19 outbreak. Again, there’s no scientific evidence that any of these work, Chapman said. In addition, ingesting bleach is dangerous, he said.

Furthermore, there is no evidence that vegetable soaps can destroy SARS-CoV-2, or any other virus for that matter, as there’s been no scientific studies saying as much, Chapman said.

Instead, “rinse fresh fruits and vegetables with running cold water,” Chapman said. “That may remove 90 to 99% of what’s there.”

However, the food scientists did agree with VanWingen on one major point.

The one-month trial gives you access to all of the educational site’s 9,000 activities in reading, science, math and art. Keep your child busy and learning while we are all stuck indoors.
View Deal