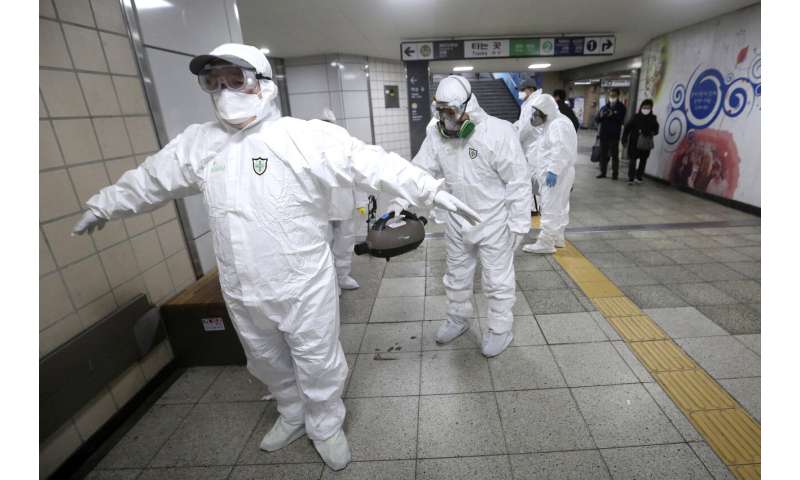 Cases of a new virus swelled Friday in South Korea, making the country the newest front in a widening global outbreak centered in China and now reverberating elsewhere.

South Korea said two people have died and 204 have been infected with the virus, quadruple the number of cases it had two days earlier. Schools were shuttered Friday, churches told worshipers to stay away and some mass gatherings were banned.

The multiplying caseload in South Korea showed the ease with which the illness can spread. Initial infections were linked to China, but new cases in South Korea and Iran—where there have been four deaths—don’t show a clear connection to travel there. In an emerging cluster of illnesses in northern Italy, the first to fall ill met with someone who had returned from China on Jan. 21 without experiencing any symptoms of the new virus, health authorities said.

The World Health Organization warned that clusters not directly linked to travel, such as the ones in South Korea and Iran, suggest that time may be running out to contain the outbreak. 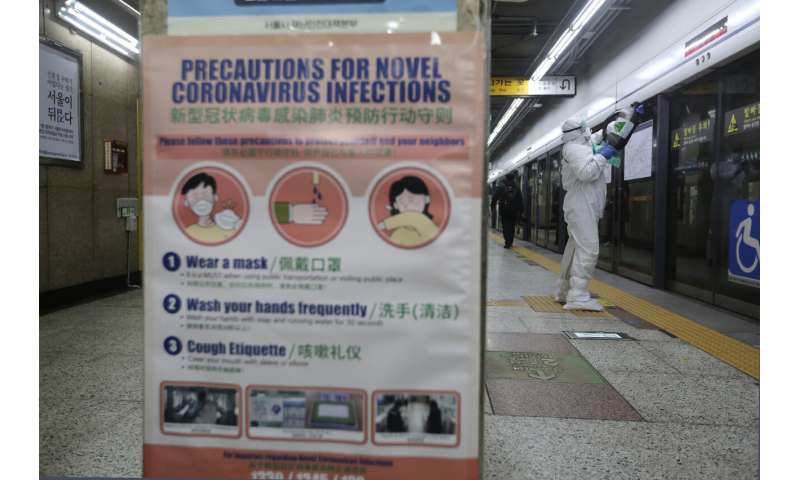 “These dots are very concerning—take them as dots or trends,” he said.

South Korea Prime Minister Chung Se-kyun started a government meeting on the health emergency by saying, “We have entered an emergency phase.”

Daegu, a southeastern city of 2.5 million that is the country’s fourth largest, emerged as the focus of government efforts to contain the disease known as COVID-19, and Chung promised support to ease a shortage in hospital beds, medical personnel and equipment. Mayor Kwon Young-jin of Daegu has urged residents to stay inside, even wearing masks at home, to stem further infection. 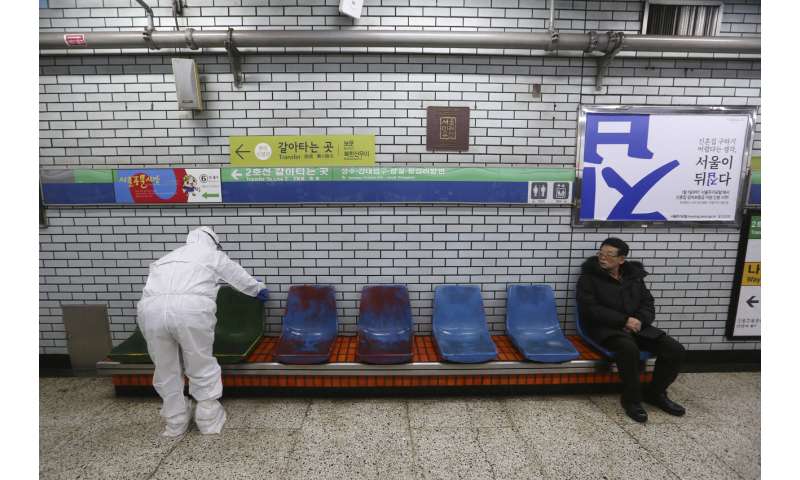 The first case in Daegu was reported on Tuesday. By Friday, the city and its surrounding areas had 152, including South Korea’s first two fatalities from COVID-19.

Nationwide, the numbers told of a ballooning problem. There were 20 new cases reported Wednesday, 53 on Thursday and 100 on Friday.

The central government declared a “special management zone” around Daegu on Friday, which didn’t restrict movement of residents or supersede local officials’ power but served as official recognition of the problem.

Most of those cases have been linked to a single house of worship, a branch of the Shincheonji Church of Jesus, where a woman in her 60s attended two services before testing positive for the virus.

About 1,000 others who attended services with the woman have been isolated in their homes for screening, and health authorities say they’re trying to monitor thousands of other church members. 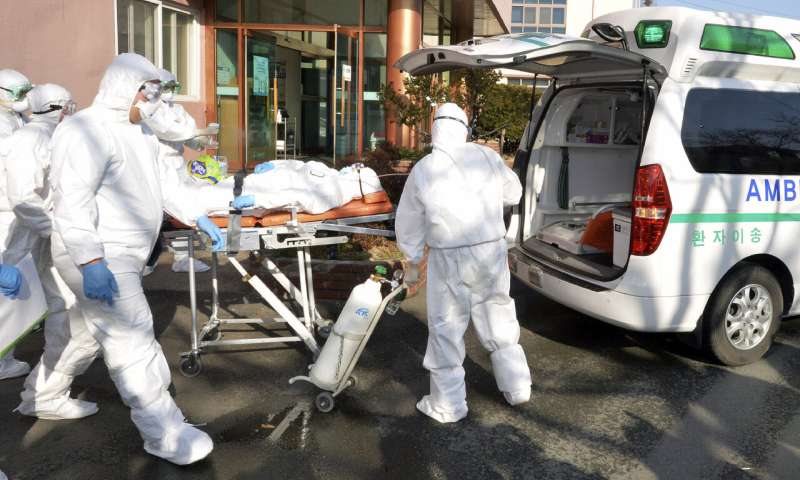 All 74 sites operated by the Shincheonji Church have been closed and worshipers have been told to instead watch services online for a sect whose leader claims to be an angel of Christ, but who is dismissed by many outsiders as a cult leader. Its teachings revolve largely around the Book of Revelation, a chapter of the New Testament known mostly for its apocalyptic foreshadowing.

Health and city officials say the woman eyed as a potential transmitter at the church had contact with some 1,160 people, both at the church and at a restaurant and a hospital where she was treated for injuries from a car accident. That raised fears that South Korea—which before Wednesday had recorded just 31 cases of the virus—should brace for a further surge.

“I hope South Korea will do everything to contain this outbreak at this early stage,” Tedros said. 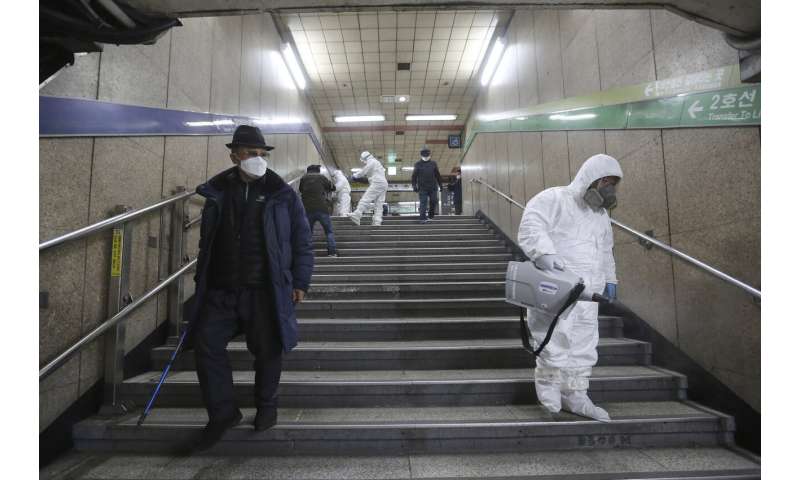 Usually bustling downtown streets of Daegu were nearly deserted Friday as people wearing face masks lined up at clinics seeking testing. Crowds formed in supermarkets where shelves of ramen and curry were nearly bare. Eight hundred area schools, due to start a new academic year on March 2, delayed their openings by a week.

“Panic is taking hold,” said Daegu resident Huh Mi-yeon. “People are scared of any situation where they would run into another person.”

Elsewhere in the country, angst grew too. In the capital of Seoul, major downtown rallies were banned, and fears of the virus led many to avoid shops and restaurants and instead eat at home and order necessities online. Buses and subways were full of mask-clad commuters.

The first three cases in the country’s 600,000-member military also sprung up on separate bases Friday, bringing added concern. A sailor on Jeju Island and an army officer in North Chungcheong province both tested positive. Both had made recent visits to Daegu, officials said. A third infection was reported in an air force officer who is based in Daegu but who had recently traveled to military headquarters in central South Korea, the defense ministry said, prompting the quarantine of 80 soldiers there. 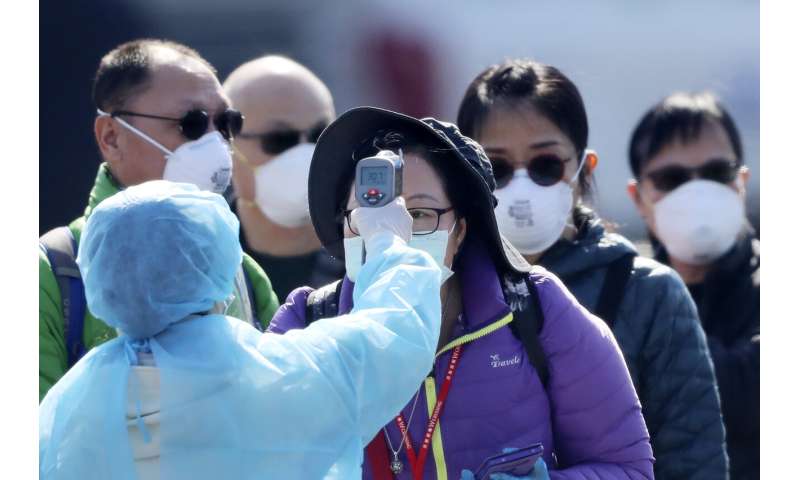 Even as new alarms were sounded elsewhere in Asia, in China, where the vast majority of cases have occurred, officials have expressed optimism over the number of new infections, which has been trending downward. China said Friday 889 new cases were recorded in the preceding 24 hours and 118 additional deaths.

WHO’s Dr. Sylvie Briand said there’s no information yet that the virus itself is changing. But she’s concerned that there are different patterns of transmission in different parts of the world, what she called “a very different phase of this outbreak depending where you look.”

Globally, more than 76,000 people have been infected in 27 countries, and more than 2,200 have died. Italian authorities say the number of people infected has more than quadrupled due to an emerging cluster of cases in the country’s north. Many of the new cases represented the first infections in Italy acquired through secondary contagion and brought the country’s total to 14 on Friday. 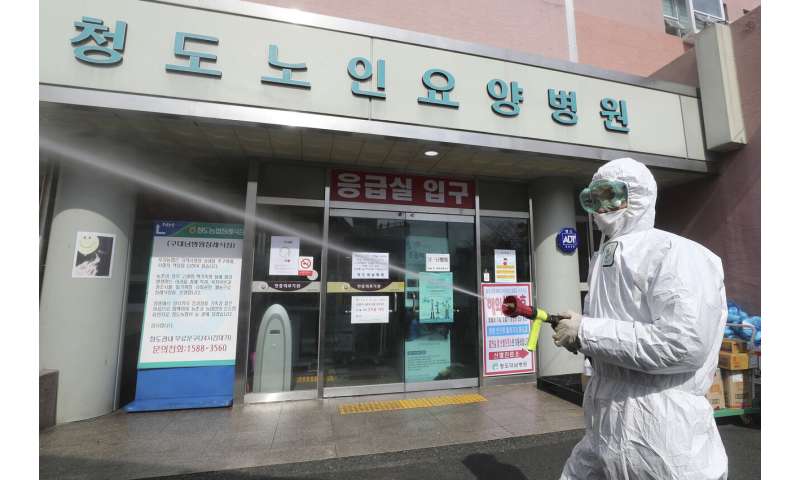 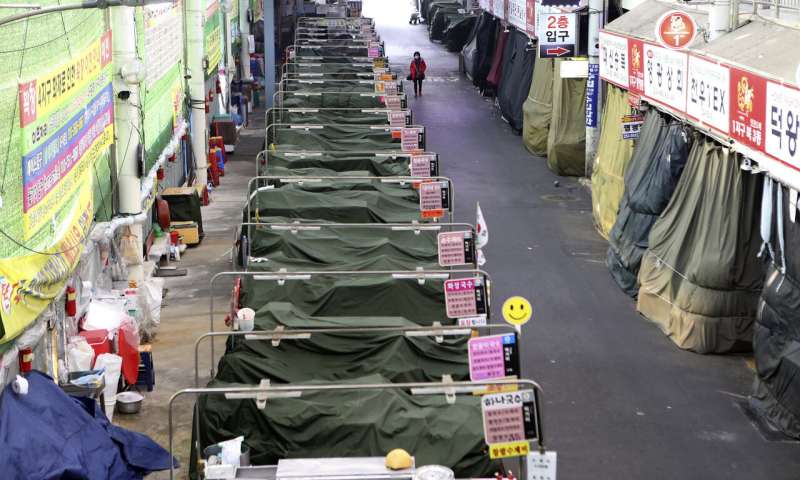 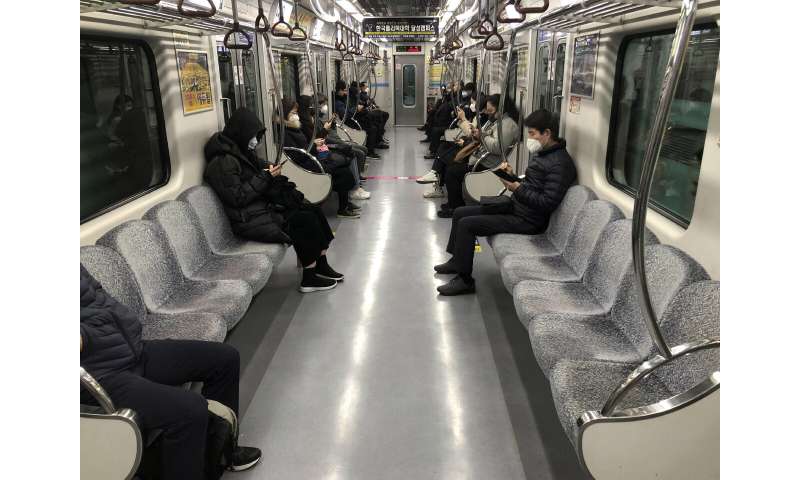 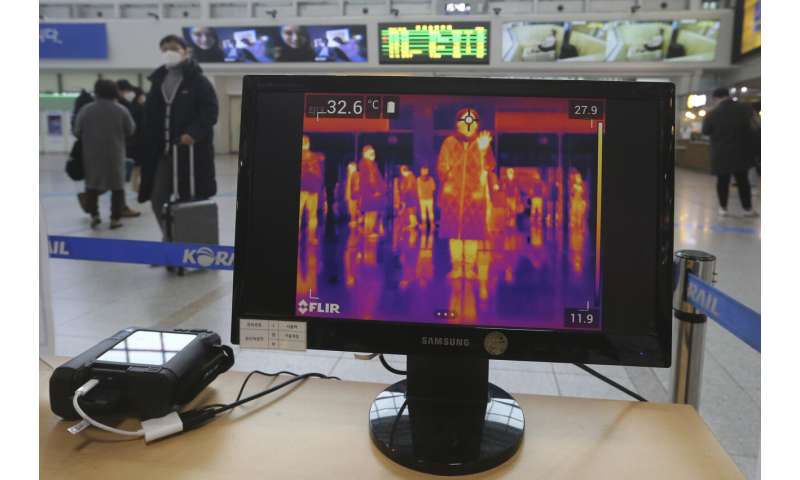 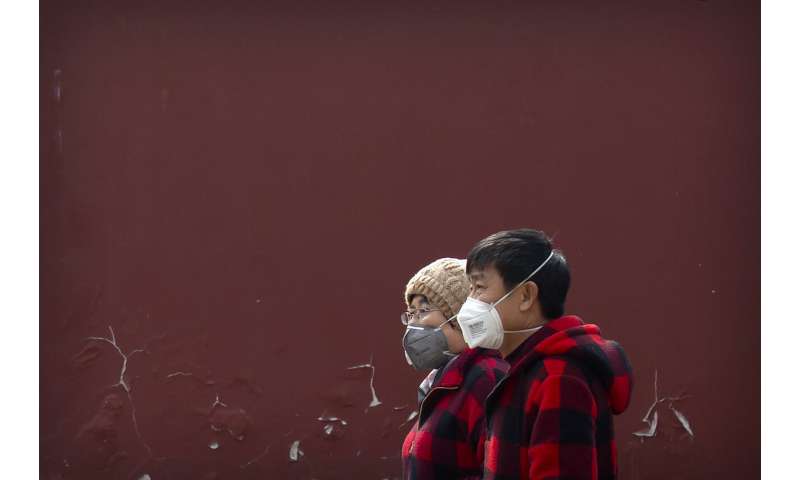 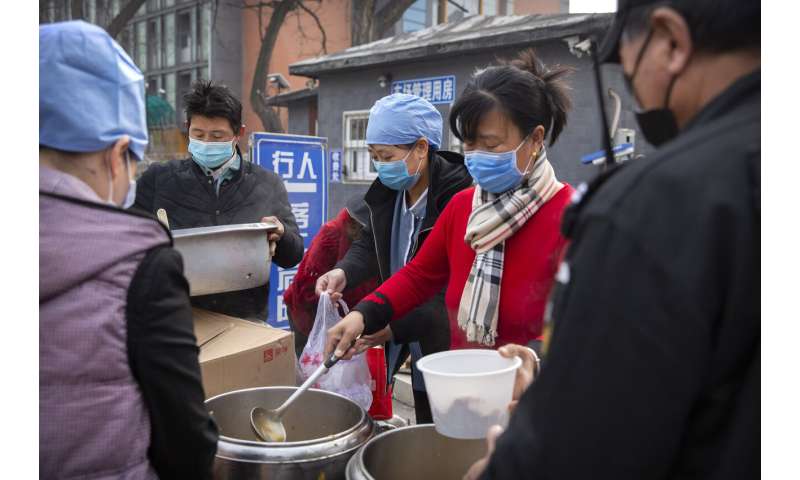 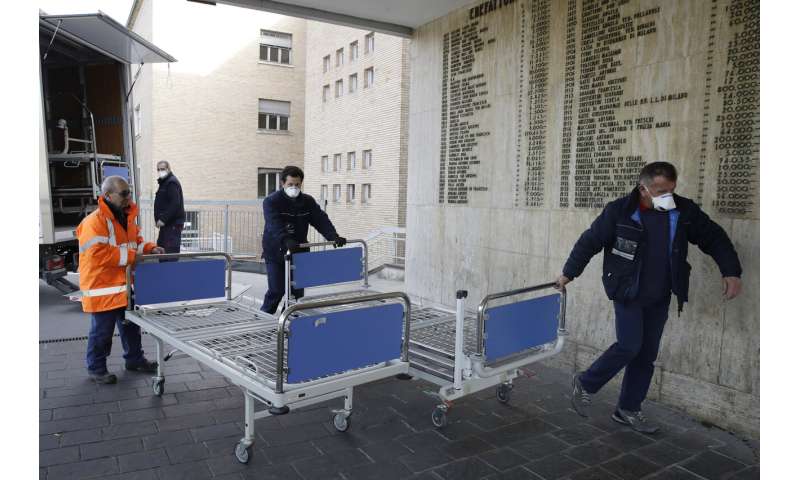 In the United States,35 people have tested positive for the virus, including 18 who returned home from a quarantined cruise ship in Japanand one new case reported Friday in California.