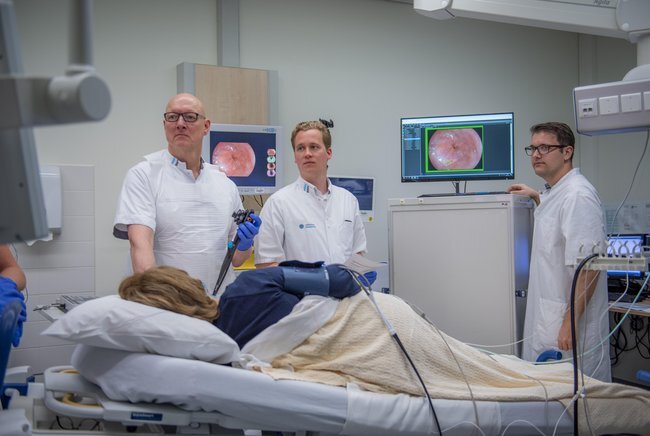 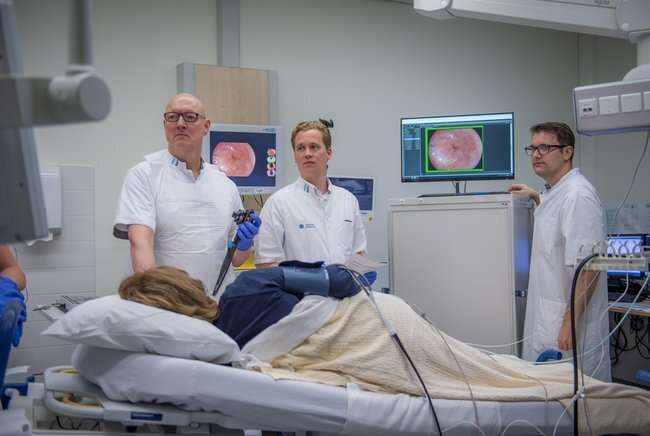 Thanks to smart software doctors will soon be able to detect early signs of esophageal cancer in patients with so-called Barrett’s esophagus. This is the result of research conducted by Amsterdam UMC, the Catharina Hospital in Eindhoven and Eindhoven University of Technology (TU/e). The results were published in the leading medical journals Gastroenterology and Gastrointestinal Endoscopy.

Patients with long-term symptoms of reflux can develop abnormal tissue in the esophagus due to irritation caused by the gastric acid. This phenomenon, known as Barrett esophagus, is one of the most important risk factors for esophageal cancer in the Western world. People with a Barrett esophagus therefore receive regular endoscopic check-ups in the hospital, which involves inserting a thin tube with a small camera into the esophagus.

However, early-stage esophageal cancer is difficult to detect; only a handful of medical specialists in the Netherlands have extensive experience in this. “That’s why doctors sometimes miss early-stage cancer, which is still easy to treat. In advanced stage cancer, the five-year survival rate is less than fifty percent,” explains Professor Jacques Bergman (Amsterdam UMC). “It is therefore important to detect the cancer in its early stages immediately.”

In their study, the researchers describe the validation of a computer algorithm that was trained on hundreds of thousands of endoscopy images, including images of Barrett’s esophagus. The research shows that the system scores significantly better than 53 international endoscopists, who assessed the images by eye. “The system achieves a score of 90 percent,” says TU/e researcher Fons van der Sommen, who developed the algorithm together with PHD candidate Joost van der Putten.

The new computer algorithm has been tested on patients at the Amsterdam UMC and the Catharina Hospital in Eindhoven. “Our system ‘watches’ live during an endoscopy in the oesophagus. The algorithm gives a red mark on a screen at a suspicious spot. The doctor can then inspect the suspect area more closely and, if necessary, take a biopsy,” says Van der Sommen.

Professor Jacques Bergman and Erik Schoon (Catharina Hospital), specialists in the field of Barrett’s esophagus and both involved in the research, welcome the findings as an important breakthrough. “The software has proved to be a big support to the gastrointestinal doctor. The computer detects early-stage cancer in Barrett’s esophagus, which is one of the most difficult things to do in our profession. Detection requires a lot of experience,” explains Schoon.