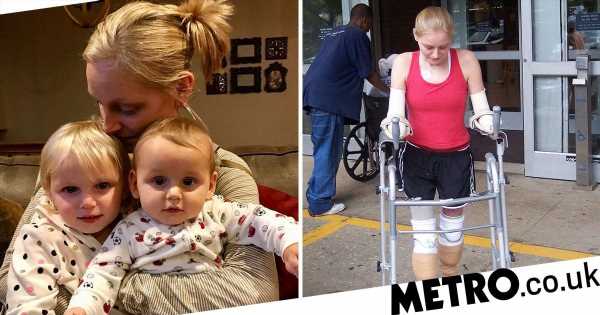 When Erica Tambrini had her legs and arms amputated, she thought it would mean that no one would ever want to be in a relationship with her.

But now, Erica is a mum-of-two and happily married to husband Luke.

She says that she doesn’t want disabled people not to think that they won’t find love.

Now, the occupational therapist is sharing her story for the first time to raise awareness of meningitis and to promote self-love.

Erica said: ‘Before I met Luke, I feared I may never find love as I was extremely self-conscious and had low self esteem.

‘We met the year after the amputation and he wasn’t fazed!

‘It was hard for me to adjust to my new appearance and I was always trying to cover my prosthetics but now I have totally embraced them and if I want to wear shorts, I will.’

Erica added that her biggest accomplishment has been becoming a mum to Lily, five and Michael, three.

She said: ‘At first I was afraid and didn’t know if I could physically carry them after my battle with meningitis.

‘It took a lot of learning and problem solving when Lily was a new born and I have got to give Luke credit as he changed every nappy for the first month of Lily’s life.

‘Whilst I mastered how to get her dressed, in the car and everything else as quickly as possible.

‘But once I conquered my fears, I wasn’t worried about the second pregnancy.

‘I am also proud that I can still work and my job is so incredible – I get to meet lots of different people and help them.’

Erica was diagnosed with meningitis in 2005 whilst she was studying to be a maths teacher at university.

She said: ‘I remember the day I fell ill like it was just yesterday, I woke up on a Tuesday morning – I didn’t feel right and progressively got worse.

‘I was taken into A&E and they confirmed meningitis. At the time, I didn’t know what it was but I knew it was bad.’

Erica was placed in a medically induced coma for seven weeks to let her body recover.

She added: ‘When I woke up my hands and feet were all wrapped up but they were black as I had sepsis.

‘I wasn’t in denial so I knew I’d need multiple amputations – at first they amputated my right leg below the knee and my left foot partially.

‘The pain was so bad I agreed to have it amputated but I am grateful they are both below the knee which is useful so I can function.

‘My main focus was being independent again and I was so desperate to get out of the hospital bed.

‘I didn’t want my family to suffer anymore so I began fighting to get back on my feet.

‘It was hard to come to terms with everything but I have accepted who I am and I won’t let it get me down.’

Although she does still get upset about not being able to do things like running after her kids in park or braiding her daughter’s hair, Erica is glad to have her family.

She said: ‘At least I am here and being the best mum possible.

‘I also work in mental health so I am able to take my own advice when going through challenging times.

‘One perk of prosthetics is I am able to ride my bike for miles without having any leg pain or muscle cramps.’

Becoming an amputee has also helped her meet many other disabled people who have supported her and she wants to continue to help others in the future.

She said: ‘The world of adaptive sports and athletes is unreal – something I may not have ever seen prior to becoming disabled.

‘I have met so many incredible people and heard many inspirational stories.

‘I want other people to know, as times goes on things get much easier.’