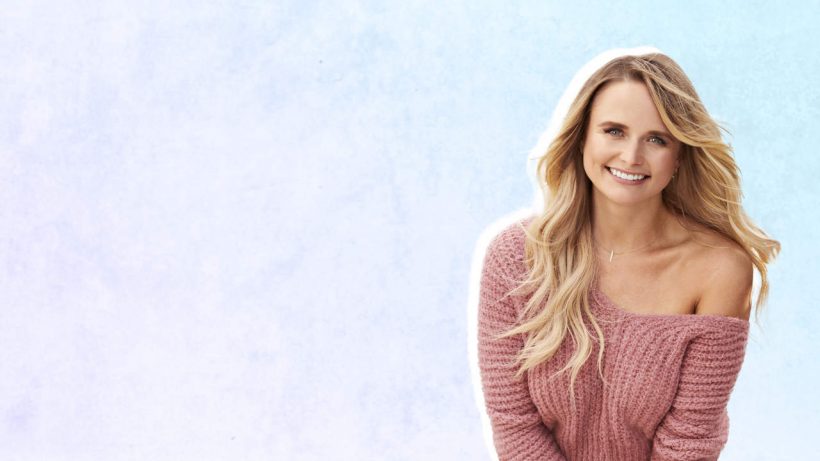 Almost all of Miranda Lambert’s biggest hits center around heartbreak, revenge, and honky-tonk hell-raising. While the 36-year-old country megastar can still serve up plenty of badass attitude onstage, her real life has been full of smiles lately. And for good reason. Lambert has just released her highly anticipated seventh studio album, Wildcard. The songs are fully inspired by where she’s at in her life now—meaning that most are much more upbeat than her last offering, 2016’s successful but somber The Weight of These Wings. The change of tune is due in large part to her happy life as a newlywed. Miranda surprised her legion of fans earlier this year when she revealed she’d secretly tied the knot with NYPD officer Brendan McLoughlin in January, after meeting him just three months earlier during a visit to Good Morning America.

Indeed, this is a time of fresh beginnings for the singer, who publicly waded through a painful divorce from fellow country star Blake Shelton in 2015. She admits that the glare sometimes took a toll, but she’s managed to stay true to who she is at her core: a fiery girl from Texas with a guitar and a whole lot to sing about.

Miranda credits her humble upbringing and tight-knit family with giving her the unwavering sense of self that’s carried her through fame and all the challenges and insecurities that come with it. As strong as she has always been, she admits to having struggled with self-confidence and her weight at times in her career, and hasn’t always felt she looked her best onstage. But with maturity came the understanding of what works for her. “I feel most sexy when I feel happy,” says Miranda. “If I’m dolled up to the nines but I’m miserable, then I don’t feel sexy.”

With the heartbreak behind her, Miranda is happier and healthier than ever—something Brendan, 28, has a lot to do with. The Staten Island native boasts six-pack abs (check out Miranda’s Instagram for a peek), and he’s a stickler for getting in a good workout and bringing her along. “Sometimes I want to kill him, and sometimes I’m thankful for it,” she jokes of their joint sweat sessions.

Here, the singer shares what else she’s thankful for—including leaving drama behind, accepting herself, and embracing a life filled with love, music, and lots of good food.

It’s been 15 years since you released your first single. What has been the biggest change you’ve seen in yourself over this time?

The biggest thing I’ve learned is to be a person, too—instead of working constantly and getting lost and letting little moments fly by because I’m too busy thinking about the next thing. I set a lot of goals for myself as a young girl, and I reached them. I’m calmer now and more aware of my surroundings.

Your new album is much more joyful than your last one. What’s behind that?

My last album was kind of a sepia tone, and I mean that emotionally as well. This record’s got some color, pizzazz, and pump to it. It was a conscious decision, switching gears, I guess in all the ways—in life and in art…don’t they go hand in hand most times? I’m pretty honest in my music. Who you’re talking to is the same person that’s onstage.

Your 2015 divorce got a lot of attention in the media—that couldn’t have been easy to go through. How did you deal?

When everyone’s worried about your personal life, it makes you feel like, “Well, if you could just spend some of that time talking about my actual art, that would be great!” But I guess I asked for it, getting into this business. I’m never gonna get used to the public eye in that way.

You and Brendan met and fell in love quickly—how did you know it was right?

Would you call it love at first sight?

I guess so. If that’s a thing. I have eight dogs. Had love at first sight with them, too. Must be way easier than I thought.

You’re a country girl, and your husband is as city as it gets. How has it been splitting your time between your serene farm in Tennessee and your new apartment in New York City?

I’ve been to New York so many times, but I’ve only ever worked [there]. I’ve never gotten to hang out and wander the city and really take it in. I really enjoy it, but it does drain your energy. That’s why going back to the farm is very important. It refuels me.

My farm just outside of Nashville is where I find my center. Honestly, I feel my prettiest when I have on a ball cap, no makeup, and cutoff jeans, and I’m at my farm just with dirt and dogs all around me. That’s where I feel my truest self.

You look amazing, though you’ve said you haven’t always felt that way. What has been your journey to loving who you see in the mirror?

I’ve been all sizes. My whole life, I’ve struggled with ups and downs in weight. I’m only 5'4" so weight shows quickly on me. I’ve hit a comfortable place; this is pretty much my size. I’m a size 6, give or take five pounds, depending on the day. It’s so good to find your place. I don’t like being onstage worrying about my body. That’s the last thing I want to be thinking about. I don’t give my best performance when I’m distracted by my insecurities.

How do you take care of yourself these days?

I don’t have any rhyme or reason to my fitness routine or dieting. I’ve been on every diet. Every time I did low-carb, I would gain [the weight] back so quickly. Sometimes I have a couple weeks where I just drink beer and eat cheeseburgers. And then I’ll go, “That was fun, but my stuff doesn’t fit.” Then I’ll spend a month doing Pilates or riding a lot and running. I’m not a runner, but I’m trying to be one.

Brendan is incredibly fit. Do you work out together?

Sometimes. He does a pity run with me, and then he does his real run. It’s sad. These days, I just try to feel good about myself and know that I’m trying. And if there’s wine and cheese, sometimes I have it.

Was there a moment that inspired you to stop worrying and embrace the skin you’re in?

There was a time when I wasn’t happy about the way I looked—but I was happy about where I was in my career, so I was like, “I’ll worry about that later.” I had a girl come up to me. She was probably my size and age, and she said, “I want you to know I threw my scale away because of you, because you’re so confident. I realized my weight is not in a scale; it’s in how I feel about myself.” That gave me confidence to be like, “Whatever state you’re in, you’ve gotta rock it.”

Speaking of confidence, you rock your tattoos proudly. Which one is your favorite?

I’ve got seven. All of my tattoos mean something. I’m not just going to ink it for no reason. I don’t have, like, a Tweety Bird or anything. One of my favorites is the guns and wings on my arm because I got it when my first studio album, Kerosene, went gold. I was just so proud of the work I’d put in. I also wanted a reminder of the work that I needed to continue to do. So every time I hold my guitar, I can see that reminder of my first milestone. I’m proud of that.

You and your mom are very close. What have you learned from her?

My mom is so beautiful. She’s a tall Cherokee Indian. If I can look like her at 60, I would be golden. All she ever used was witch hazel and Vaseline. And she’s always been a stickler for taking off your makeup. To me, a good face-wash feels like an emotional cleanse. And nowadays, sunscreen is a big part of my skin routine. It wasn’t when I was young, but now I’m in a hat all the time. I take really good care of my skin, especially being out on the road.

After taking eight months off to get married and enjoy life, how does it feel being back out on tour—this time with Brendan along for the ride?

I’m trying to embrace being on the road. We played Tahoe the other day and stayed a couple extra days. As musicians, we go everywhere, but we don’t see very much. I’m trying to explore and enjoy.

So is this easygoing, heart-on-her-sleeve Miranda here to stay?

I didn’t leave all my edge behind, but I’m definitely celebrating joy a lot more than I have before. I’ve had a pretty amazing journey.

To get our top stories delivered to your inbox, sign up for the Healthy Living newsletter