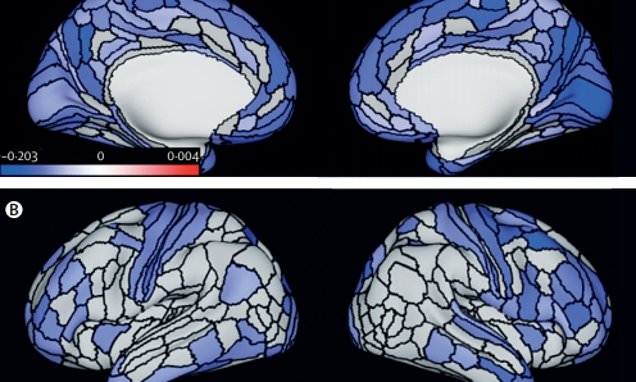 Criminals have ‘smaller BRAINS’: Scientists claim the ‘handicap’ which can be spotted in early childhood may explain why life-long offenders lie, steal and are violent

Brain scans of almost 7,000 people aged 45 were analysed – a third had a history of antisocial behaviour ranging from physical fighting to truancy.

People with a lifetime of convictions behind them had structurally smaller and thinner brains, some of which were in areas responsible for behaviour and emotion control.

Researchers also looked at their criminal records and questioned their teachers and nursery staff, identifying a group of 80 adults with a ‘persistent’ history of antisocial behaviour and physical violence, ranging from biting other children in nursery to domestic violence as an adult.

Those who had only caused trouble as adolescents did not have significant brain differences compared to the general population, however.

Experts said the findings are a ‘valuable’ insight into what drives crime and how to prevent it happening. 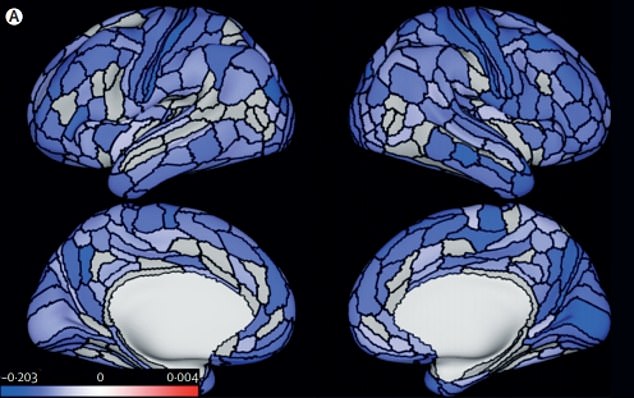 Life-long criminals have smaller brains and it may explain why they lie, steal or are violent, scientists say. They analysed brain scans of almost 700 people. Pictured: The average brain of a life-long criminal. Blue areas indicate which parts are smaller when comparing to someone who has never committed a crime. The darker the shade of blue, the stronger the change was 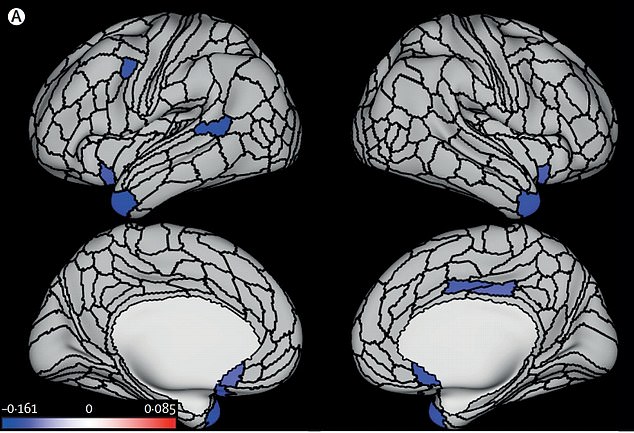 Pictured: The brain of an average life-long criminal from four angles. The blue areas are where the cortex is statistically thinner when comparing to someone who has not committed crime

The study led by University College London and published in The Lancet used data from a cohort of 672 people from New Zealand.

The participants’ level of antisocial behaviour had been measured every two years from the age of seven to 26 using self-reporting and reports from parents, carers and teachers.

The participants were followed through adulthood, and 80 had what the researchers call ‘life-course-persistent’ antisocial behaviour. They had been convicted five times between the age of 26 and 28.

The researchers took MRI brain scans of participants at the age of 45 and compared the cortical surface area and cortical thickness of 360 different regions of the cortex.

On average, across the entire brain, those who were antisocial into adulthood had a smaller surface area in 282 of 360 brain regions than people who had no history of antisocial behaviour.

They also had thinner cortex in 11 of 360 regions. The areas effected have been previously linked to antisocial behaviour through their involvement in regulation of emotions, motivation and goal-driving behaviour.

Co-author Dr Terrie Moffitt said: ‘I think what we’ve seen with these data is they are actually operating under some handicap at the level of the brain, so I think for me, this changes my conception of the “life course persistent” antisocial individuals now, to thinking of someone who is living life with some level of disability, and coping with that as part of their lifestyle.’

The authors say the study provides the first robust evidence to suggest that underlying brain differences are linked to antisocial behaviour.

Study lead author Dr Christina Carlisi said those who commit crimes their whole life could benefit from ‘more support throughout their lives’.

She said: ‘Our findings support the idea that, for the small proportion of individuals with life-course-persistent antisocial behaviour, there may be differences in their brain structure that make it difficult for them to develop social skills that prevent them from engaging in antisocial behaviour.’

Widespread differences in brain structure were not found for the adolescence-limited group compared with either the general population or the life-long antisocial group.

The researchers said these findings have implications for the way the criminal justice system treats juvenile offenders. 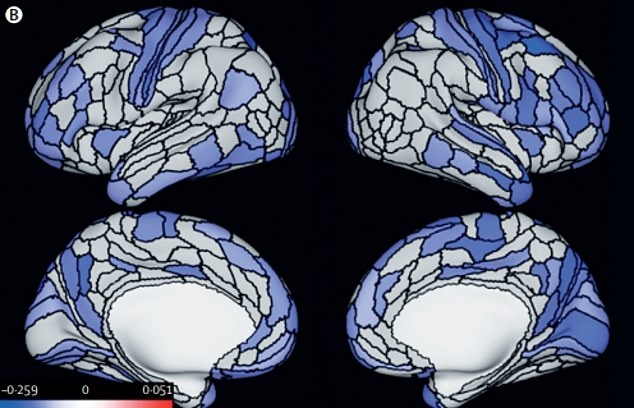 Pictured: The average brain of a life-long criminal from four angles. The shades of blue indicate the regions which were smaller compared to an adolescent-only criminal. The darker the shade, the stronger the changes

WHAT ABOUT HEAD INJURIES?

Scientists have repeatedly shown that head injuries are related to crime.

Traumatic brain injury (TBI) can cause lacerations and bruising to the brain. Internal bleeding can also occur.

Up to 60 per cent of those in custody have experienced a severe blow to the head, whether from falls, assaults or road accidents, according to UK researchers who published findings in 2018.

Results of the study further reveal TBI-suffering prisoners are more likely to behave badly in custody, reoffend and engage poorly with any treatment they receive.

Such injuries, which affected serial killer Fred West and the notorious Kray twin gangsters, are thought to alter the brain’s structure, making individuals less capable of regulating their behaviour and more at risk of psychiatric disorders.

He commented on today’s study, which found life-long criminals have smaller brains.

The team analysed the brain scans controlling for head injuries, as well as IQ and socioeconomic status, for example. But Professor Williams said he would have liked to have seen the researchers account for TBI more.

Professor Williams said: ‘We now know that relatively mild TBIs can have an effect on young peoples’ brains in the longer term. Especially if repeated.

‘By age 45, people may not recall such events – or see them as serious enough to report.

‘That being said, this is a fascinating, and well conducted study which helps us piece together the neuroscience of crime.’

They said the majority of adolescent offenders have a short brush with crime but do not continue displaying antisocial behaviours into adulthood. This makes them ‘really good candidates to reform and rehabilitate’.

Dr Carlisi said: ‘Most people who exhibit antisocial behaviour primarily do so only in adolescence, likely as a result of navigating socially difficult years, and these individuals do not display structural brain differences.

‘It is also these individuals who are generally capable of reform and go on to become valuable members of society.’

Dr Moffitt said: ‘Political approaches to juvenile offending often swing back and forth between punitive measures and approaches that give young offenders room to reform.

Dr Moffitt cautioned against brain imaging as a screening tool to identify people who may become life-long criminals.

This is because the understanding of brain structure differences are not robust enough to be applied on an individual level.

As well as this, the team acknowledged the MRI scans were taken at the age of 45, therefore it is not clear if the structural brain differences were a cause of antisocial behaviour, or a result of a troubled life associated with crime.

Those who commit life-long crimes may have smaller brains because they do drugs, smoke, suffer poor mental health or have a lower IQ – more research is needed to find this out.

Co-author Professor Essi Viding said: ‘It is unclear whether these brain differences are inherited and precede antisocial behaviour, or whether they are the result of a lifetime of confounding risk factors (eg, substance abuse, low IQ, and mental health problems) and are therefore a consequence of a persistently antisocial lifestyle.’

Speaking at a Science Media Centre conference, academics who were not involved in the study welcomed the findings – the largest to compare brains in people with varying criminal tendencies.

He said: ‘This is a valuable and insightful contribution to the debate on what drives crime.

‘There is, clearly, a strong theme that the brain systems for controlling mood and behaviour is somewhat different in those who go on to offend beyond the adolescent period.

‘This reinforces the need to help children and young people who have trouble “self-regulating” to get help at the earliest opportunity to reduce risk of escalation of behaviour.

‘Maybe in schools, to help manage behaviour that could lead to school exclusion.’

Kevin McConway, emeritus professor of applied statistics, The Open University, said: ‘These research findings are consistent with the hypothesis that life-course-persistent antisocial behaviour arises as a result of abnormal brain development

‘The study can’t tell us from what age those brain differences were there, because the participants’ brains were scanned only at age 45.

‘Another possibility is that the differences were there right from a very early age for some reason, perhaps genetic.’