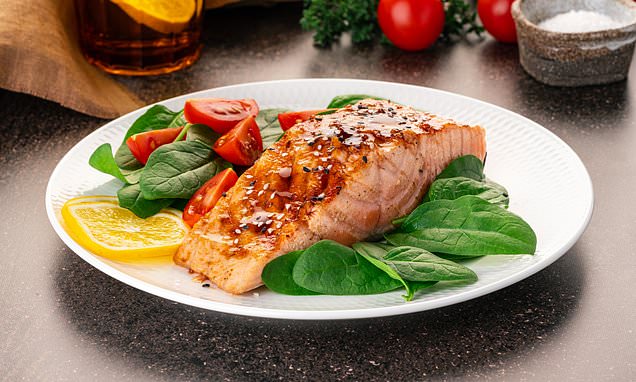 Eating fish in middle age could make you better at problem-solving and ward off memory loss.

A study of almost 2,200 Americans, mainly in their forties and fifties, measured the level of omega-3 fatty acids in their blood.

These come mainly from eating oily fish like salmon, mackerel, herring and sardines, although people can also get them from supplements.

The higher omega-3 level people had, the better they generally did in a test of complex reasoning, which is linked to being good at problem-solving in real life.

The three-quarters of people with the highest omega-3 level also had a larger hippocampus – the brain region linked to memory.

These people were likely to have eaten at least one serving (3g) of oily fish a week, according to researchers. 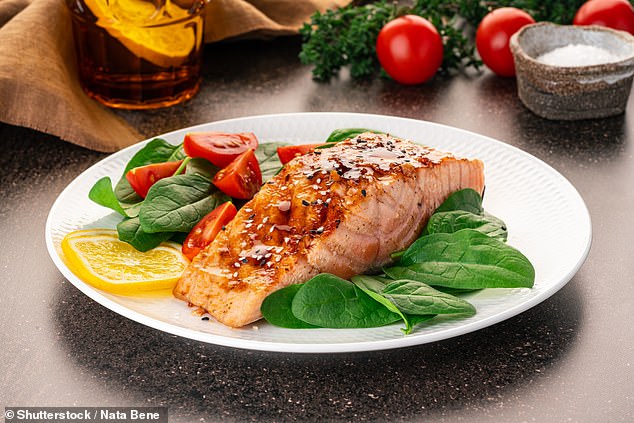 Eating fish rich in omega-3s, like salmon, in middle age could make you better at problem-solving and ward off memory loss (file)

This larger hippocampus is likely to ward off dementia, as people have more brain cells to lose as they get older before suffering any memory loss.

Dr Claudia Satizabal, who led the study from the University of Texas Health Science Centre in San Antonio, said: ‘Eating fish, which is quite easy to do if you live by the coast in the UK, could help your brain age more healthily and protect against dementia.

Omega-3 is thought to have a positive, anti-inflammatory effect, which can benefit a number of heath conditions and protect people from disease.

It is found in rich quantities in the flesh of oily fish including salmon and trout.

These acids are important because the body cannot make them itself, so they much be provided by diet or supplements.

Previous research has indicated that fish oil is most effective in supporting heart and brain health as well as reducing joint pain.

‘These results even suggest it could help middle-aged people while they are young and healthy, by boosting their thinking skills.’

People in the study, published in the journal Neurology, were not asked how much fish they ate, which they often misremember.

Instead, omega-3 was measured in their blood before they completed a series of cognitive tests and had their brain scanned in an MRI machine.

Researchers split the people they studied into four groups based on their omega-3 levels.

The three groups with the highest level, compared to the group with the least omega-3, had a larger hippocampus, suggesting a clear benefit for learning and memory as they age.

This was the case even when factors including age and high blood pressure, which can affect brain health, were taken into account.

Omega-3 was linked to better abstract reasoning, based on asking people questions about separate objects, such as what a knife and scissors have in common – answer: they both cut things.

The higher someone’s omega-3 level, the better they generally did on this important test of mental ability.

The fatty acids in fish may help the brain by reducing harmful inflammation.

Commenting on the study, Dr Sara Imarisio, head of research at Alzheimer’s Research UK, said: ‘As the saying goes, “You are what you eat”, and just like other parts of the body our brains can be affected by the way we live our lives, including our diet.

‘Research into omega-3 and brain health has produced mixed results and while this study adds to the evidence base, it is exploratory and not conclusive.’

The NHS says a healthy, balanced diet should include at least two portions of fish a week, including one of oily fish to help keep the heart healthy.