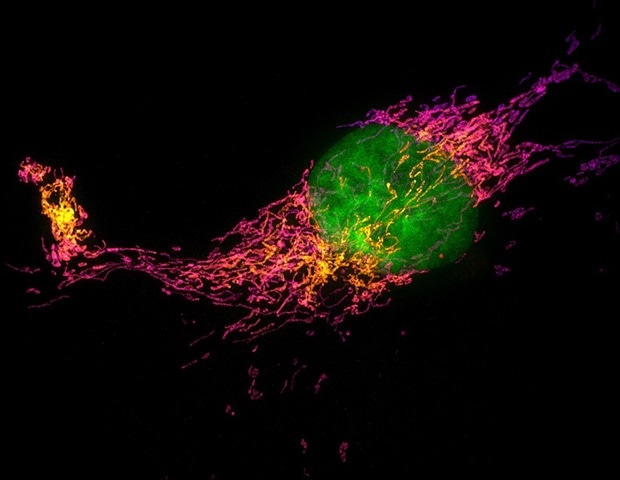 Research groups at the University of Helsinki uncovered how motor protein myosin, which is responsible for contraction of skeletal muscles, functions also in non-muscle cells to build contractile structures at the inner face of the cell membrane.

This is the first time when such 'mini-muscles', also known as stress fibers, have been seen to emerge spontaneously through myosin-driven reorganization of the pre-existing actin filament network in cells. Defects in the assembly of these 'mini-muscles' in cells lead to multiple disorders in humans, and in the most severe cases to cancer progression.

A new study published in eLife, drills into the core mechanisms of stress fiber assembly, and reveals how stress fibers can be built directly at the cell cortex: a specialized network of actin filaments on the inner face of the cell membrane. The research, carried out in the groups of Academy Professor Pekka Lappalainen at HiLIFE Institute of Biotechnology, and Docent Sari Tojkander at Faculty of Veterinary Medicine, University of Helsinki, uncovers that myosin pulses, which were previously connected to shape-changes in the epithelial tissues during animal development, can template assembly of stress fibers at the cell cortex.

In this process, non-muscle myosin II, a close relative to the protein responsible for muscle contraction, is locally and temporally recruited to the cortex, where it organizes the initially mesh-like actin filament network into parallel rod-like structures. These structures then engage the growth and maturation of focal adhesions at the both ends of the actomyosin bundle, finally creating a stress fiber at the cell cortex (see Figure).

"Previous studies from our group at University of Helsinki and other laboratories abroad demonstrated that stress fibers can arise at the front of the cell from small actin- and myosin-containing precursor structures, and that stress fibers disassemble at the back of the cell as it moves forward. Now we reveal a completely new mechanism by which stress fibers can form in cells, and provide an explanation for why 'mysterious' myosin pulses occur at the cell cortex," Lappalainen comments.

"Intriguingly, we also observed that this type of stress fiber generation was most prominent under the nucleus, which stores all genetic information and is the largest organelle in our cells. It could be that cortical stress fibers protect the nucleus or aid the movement of the nucleus along with the rest of the cell body," adds Dr. Jaakko Lehtimaki who is the lead author of this study.

The new findings bring forth an important new feature in the stress fiber toolbox. Cells in the three-dimensional tissue environment rarely display stress fiber precursors typically seen in cells migrating on a cell culture dish. Thus, myosin pulse-mediated assembly process enables assembly of contractile structures in cells migrating in various environments. Because myosin pulses have been witnessed in many different cell- and tissue types, this might serve as a universal mechanism for local force-production in the non-muscle tissues.

The role of myosin and actin proteins

The most abundant components of our muscles are myosin motor proteins, and bar-like filaments assembled from protein actin. Coordinated 'crawling' of myosin motor proteins along actin filaments is the principal mechanism that generates the force for muscle contraction. However, such myosin-based force-production is not limited to muscles, because also cells in other tissues within our bodies have similar contractile structures. These 'mini-muscles' of non-muscle cells, called stress fibers, are composed of the same central players (actin and myosin) as the contractile units of muscles.

Within our bodies, skeletal muscles attach to bones via tendons, whereas special adhesion structures named focal adhesions connect stress fibers to the surroundings of the cell. This enables the stress fibers to sense and emit forces between cells and their environment. In addition to being the major force-sensitive structures in cells, stress fibers are important for proper differentiation that is, specialization of cells to different tasks in the body. They also protect the nucleus when the cell is migrating in a challenging three-dimensional tissue environment. Consequently, defects in stress fiber assembly in cells contribute to multiple disorders, such as atherosclerosis, neuropathies, and cancer progression.