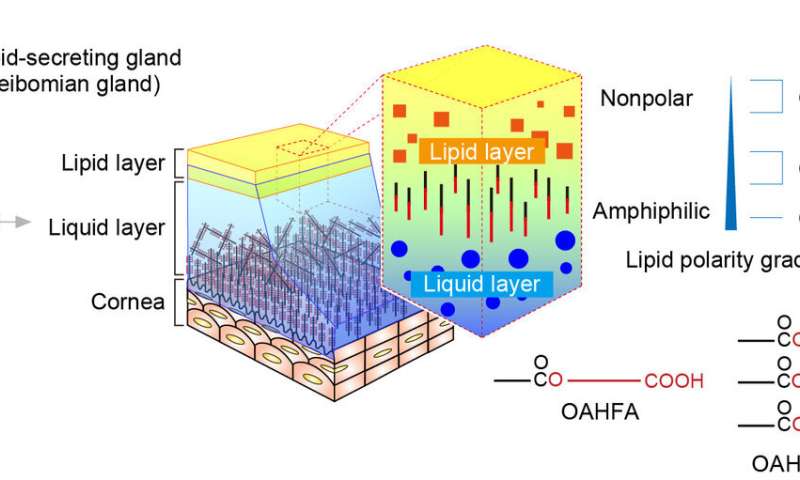 New understandings of how lipids function within tears could lead to better drugs for treating dry eye disease. A new approach has given Hokkaido University researchers insight into the synthesis and functions of the lipids found in tears. Their findings, published in the journal eLife, could help the search for new treatments for dry eye disease.

The film of tears covering the eye’s surface is vital for eliminating foreign objects, providing oxygen and nutrients to the eye’s outer tissues and reducing friction with the eyelid. The film is formed of an outer lipid layer and an inner liquid layer. The outer lipid layer, which is itself formed of two sublayers, prevents water evaporation from the liquid layer. Dry eye disease develops when the glands that produce these lipids dysfunction. However, it has remained unclear how those generally incompatible layers—water and lipid—can form and maintain tear films.

Hokkaido University biochemist Akio Kihara and colleagues wanted to understand the functions of a subclass of lipids called OAHFAs (O-Acyl)-ω-hydroxy fatty acids) that are present in the inner lipid sublayer (amphiphilic lipid sublayer) just above the liquid layer of the tear film. OAHFAs are known to have both polar and non-polar ends in its molecule, giving them affinity for both water and lipid.

To do this, they turned off a gene called Cyp4f39 in mice that is known for its involvement in ω-hydroxy fatty acid synthesis. Previous attempts at studying the gene’s functions in this way had led to neonatal death in mice, as it impaired the skin’s protective role. The team used a way to turn the gene off, except in the skin.

The mice were found to have damaged corneas and unstable tear films, both indicative of dry eyes. Further analyses showed that these mice were lacking OAHFAs and their derivatives in their tear films. Interestingly, the scientists also discovered that the OAHFA derivatives have polarities intermediate between OAHFAs and other lipids in the tear film. This strongly suggests that those lipids together form a polarity gradient that plays an important role in connecting the tear film’s inner liquid layer and outer lipid layer, helping the film spread uniformly over the surface of the eye.

“Drugs currently used in dry eye disease target the liquid layer of the tear film, but there aren’t any drugs that target its lipid layer,” says Akio Kihara. “Since most cases of dry eye disease are caused by abnormalities in the lipid layer, eye drops containing OAHFAs and their derivatives could be an effective treatment.”