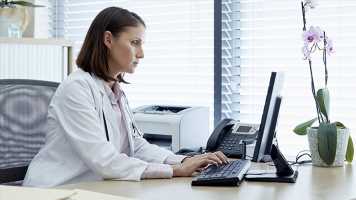 In January and February, telemedicine technology vendor Doxy.me hosted about 250,000 video sessions a month, according to founder Brandon Welch.

By May, Welch said, the service was hosting a million sessions per day.

The upswing of interest in telehealth and virtual care, combined with the federal focus on interoperability, has highlighted the importance across the industry of keeping patient data secure. At Doxy.me, Welch said, much of that patient security is safeguarded through the vendor’s service model.

“We don’t store patient data,” Welch explained to Healthcare IT News. “When patients come, they’re anonymous on our system. All we see is providers had a call that lasted 30 to 40 minutes.” Patients don’t have to log in using their own names, and providers can ask to verify their identification through showing their ID and health insurance cards over video.

Providers can add links to their Doxy.me rooms to a patient’s electronic health record – allowing the patient to access the meeting through a patient portal – but the flow of data is not bidirectional.

For the video component of its service, Doxy.me uses WebRTC, an open-source, standardized product that relies on browser security and end-to-end encryption.

“Since we work in the browsers, we can use browsers’ security teams,” said Dylan Turner, COO, cofounder and security officer at Doxy.me. “That’s way more secure than downloading things to the computer.”

Browsers themselves can have their own security holes, such as with extensions that scrape data, but Doxy.me’s peer-to-peer communication tries to minimize the vulnerabilities that can arise from requiring users to download a separate app.

Two weeks ago, Doxy.me also started a “bug bounty” program through HackerOne, which compensates individuals who find potential gaps in its security system. Though Turner said other security companies had reviewed Doxy.me’s practices, and the vendor had always had an informed disclosure system (of the “see something, say something” variety) this was a more formalized process. So far, Turner said, a “handful” of people have participated.

Of course, phishing is still a major cause of security breaches, with bad actors using social engineering and deceptive messaging to lure users into sharing passwords or personal information. Internally, Doxy.me hosts anti-phishing training and uses a password management system, so that employees don’t create their own passwords.

Providers who use the service are prompted to create secure passwords. When Healthcare IT News created a free account as a provider, the registration system marked the password “password” as less safe but still allowed its use; it also did not authenticate the email address provided. Two-factor authentication is not an automatic feature, but hospitals and clinics who use Doxy.me can mandate it or use their own password management systems. Providers can also opt in to two-factor authentication.

Turner also added that even if someone were to break into a provider’s account, all they would have access to is public information – their name and place of work.

Doxy.me representatives confirmed via email that two-factor authentication will be required in the future for all accounts, diminishing the chances of someone impersonating a provider.

Its goals also include adding more security features. For example, a provider can implement two-factor authentication through an app rather than through a less secure text message. Turner also pointed out Gmail’s flag when someone logs onto an account through a new device as a helpful add-on.

“One of our fundamental philosophies about telemedicine is we want to focus on the best patient-doctor interaction,” said Welch. “We don’t want to come in as a telemedicine app and try to become an EHR.”

“Our goal is to make telemedicine available for all,” he continued.