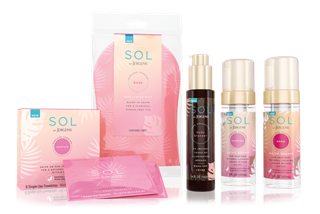 When Jergens Natural Glow launched in 2005, it was instant hit. A WWD report in December of that year proclaimed that “shoppers scrambled to find it, retailers couldn’t get enough of it and prestige beauty marketers rushed to launch similar innovations.” The franchise, which promised to deliver a healthy, tanned glow along with moisturized skin, was estimated to have made $50 million in retail sales in it first nine months on shelves.

Fifteen years later, Kao Corp.-owned Jergens is launching in the U.S. market a new self-tanner line for the selfie generation. Sol by Jergens, due in mass retailers such as Target, Ulta Beauty, CVS and Walgreens in March, consists of three self-tanning and bronzing products that promise a more intense tan than Natural Glow.