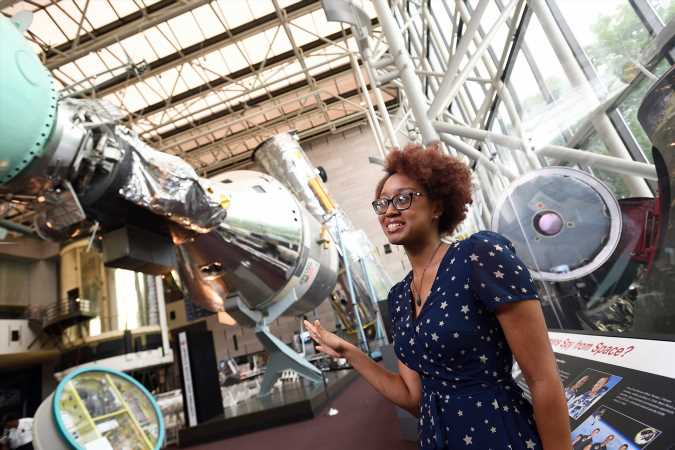 Miché Aaron has always been a high achiever. The 29-year-old is in her third year of a planetary sciences doctoral program at Johns Hopkins University, where she researches minerals found on Mars. She’s a former NASA space grant scholar and hopes to become an astronaut one day.

But last year, Aaron was barely keeping it together — missing classes, late on assignments and struggling to explain that she understood the required material to pass her qualifying exams. Her academic adviser warned that if she didn’t get professional help she would flunk.

“I simply thought I was a lazy student and I needed to try harder,” Aaron said, wiping the tears behind her thick, black-framed glasses.

Then she was diagnosed with attention deficit hyperactivity disorder and it all made sense.

For many Black women like Aaron, finally having that answer comes with both relief and grief after years of suffering and being misunderstood. Already subject to unique discrimination at the intersection of gender and race, Black girls with ADHD often remain undiagnosed because their symptoms are mischaracterized. Signs of inattentiveness or impulsivity, two main features of the disorder, could be mistaken for laziness or defiance. And the longer these girls aren’t diagnosed and treated, the more their problems are likely to worsen as they grow into adults.

While the 2016 National Survey of Children’s Health showed that 6.1 million children ages 2 to 17 in the United States have received a diagnosis for ADHD at some point, millions more adults are estimated to have it, too — either having grown up with a diagnosis or being diagnosed later in life, if at all.

ADHD doesn’t discriminate by gender or race, but white boys are still more likely to be diagnosed and treated for the condition than anyone else. Experts and advocates say this leads to an inequity in care that hurts girls of any background and children of color of any gender.

Over the past few decades, mental health experts and researchers have started to understand how ADHD manifests differently depending on gender, as girls with the condition tend to seem more inattentive and forgetful while boys tend to seem more hyperactive and disruptive. The reasons Black children and ethnic minorities are overlooked range from racial bias in schools and lack of access to care, to stigma and distrust of educators and health providers based on past discrimination.

Paul Morgan, director of the Center for Educational Disparities Research at Penn State, is the lead author of multiple studies showing that the disparities in school start early. By kindergarten, Black children in the U.S. are 70% less likely to receive an ADHD diagnosis than otherwise similar white children.

A 2016 study found that by 10th grade white children are nearly twice as likely to receive a diagnosis for ADHD as Black children. Lead author Dr. Tumaini Rucker Coker, head of general pediatrics at Seattle Children’s Hospital and a top researcher at its Center for Child Health, Behavior and Development, said that, while her study didn’t look at underdiagnosis of Black girls, federal Education Department data shows telling signs of racial and gender discrimination in diagnosing ADHD: Black girls are six times as likely to be suspended from school as white girls.

Behavior as common as talking back in class could have wildly different consequences, depending on how it’s interpreted, Coker explained. For Black girls, it’s often viewed as “intimidation” of a teacher.

Over time, studies have shown that ADHD, especially in girls, can lead to increased rates of anxiety and depression, risky behavior, drug use, self-harm and suicide attempts. Researchers and therapists said they are especially worried about those undiagnosed or undertreated.

Being diagnosed and treated, on the other hand, has many upsides. Medication and therapy, and even behavioral training for parents of patients, have proven to be highly effective in managing ADHD. However, access to such resources depends not only on a diagnosis, but also trust and buy-in from families.

René Brooks, who lives outside Gettysburg, Pennsylvania, was diagnosed three times — twice as a child, when her school tested her without parental permission. Her mother rejected the idea of her daughter, who is Black, being labeled, distrusting a system she feared wanted to “drug up minority children.”

The third time Brooks was diagnosed, she was 25 and on the brink of losing her job at one of the biggest insurers in the state because she couldn’t keep up with the workload. After starting medication, 18 years after her first diagnosis, she said her brain felt like it “switched on” and she was able to be more productive than she ever imagined possible.

Still, as a Black woman with ADHD, Brooks felt alone. “It’s very isolating to sit at that intersection because no one’s there, or so we thought,” she said.

She started a blog called “Black Girl, Lost Keys,” which educates and empowers Black women with ADHD, and created Unicorn Squad, Black People of Marginalized Genders With ADHD, a private support group on Facebook with more than 2,200 members who share the feelings that come with the diagnosis.

Aaron said finding the Facebook group and talking with other Black women with ADHD during the weekly virtual meetings made it easier to accept her diagnosis. They also commiserate about the all-too-common racialized slights known as microaggressions that she and others face — whether it’s being dismissed for showing emotion as an “angry Black woman” or having to fight for accommodations at school or being doubted at pharmacies when trying to fill prescriptions for stimulants that treat ADHD under the assumption they’re addicts trying to misuse the controlled substances, sold under brand names such as Adderall, Concerta and Ritalin.

Dr. Loucresie Rupert, a child-adolescent psychiatrist, adult ADHD coach and mental health advocate in Winona, Minnesota, also blogs about her personal experience with ADHD. She recognized her symptoms during medical school — problems studying, missing appointments, forgetting to pay bills — and was officially diagnosed during her medical residency, after failing a two-day-long licensing exam. The latter was a wake-up call. “I’ve never failed at anything in my life,” said Rupert.

Rupert said she, too, sees a Black female psychiatrist, who shares some of the same experiences and sensitivities, which makes a big difference. “It’s taken my healing and my ability to function to the next level, because you don’t have to explain as many things.” For example, when discussing police brutality, she said, “I don’t have to spell out how exhausted or tired or traumatized I am.”

Coker and Morgan agreed that culturally and linguistically sensitive screenings are key to getting more people diagnosed. Also critical: culturally relevant groups like the Unicorn Squad.

A year and a half after being diagnosed with ADHD, Aaron said the treatment she’s received, including medication, therapy and strategies for learning and organization, has changed her life. She has since found out she also has dyslexia and a language processing disorder, two learning disabilities that commonly occur with ADHD.

Far from flunking out, she’s now thriving academically and publishing her research on Martian minerals. She wants to help other Black women going through similar struggles, just as Brooks’ Unicorn Squad helped her.

“When you start receiving treatment, the biggest impact is to your self-esteem, because you’re no longer concerned that you’re just lazy, or that you’re just unmotivated,” said Brooks. “You know this is a problem, and problems have solutions, whereas character flaws do not.”