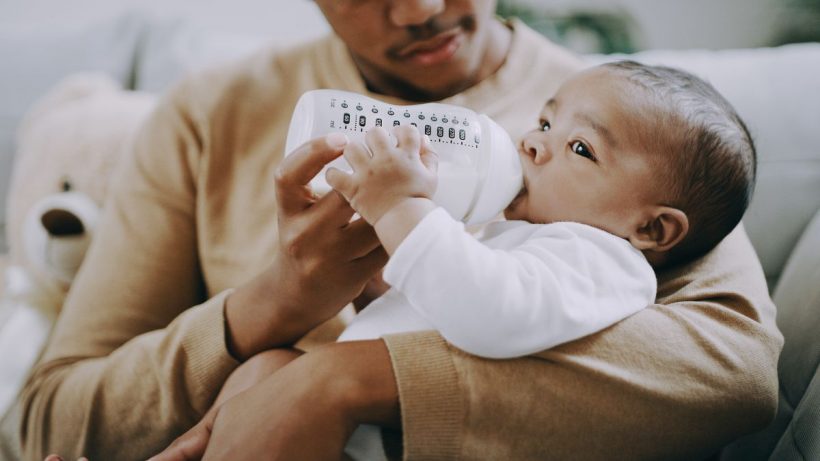 Babies under 12 months old should drink either human breast milk or infant formula — and not cow’s milk, according to the American Academy of Pediatrics. So, is cow-made milk dangerous for little ones?

Human milk is produced specifically for human babies, whereas cow’s milk is really for calves, Dr. Jae Kim, director of the Division of Neonatology at Cincinnati Children’s Hospital, told Live Science. As such, cow’s milk contains proteins that are hard for babies to digest, and it lacks key vitamins and minerals, such as iron, that babies need to develop. Even though infant formula is made from cow’s milk, manufacturers remove the proteins and alter them before adding them back to the formula, along with other essential ingredients. “The final infant formula is quite different from the dairy milk you get,” Kim said.

An infant’s gut, kidneys and immune system need time to mature before they can safely tolerate new types and amounts of protein found in cow’s milk, Kim said. High concentrations of the protein and minerals found in cow’s milk “can stress a newborn’s immature kidneys and cause severe illness at times of heat stress, fever or diarrhea,” according to the American Academy of Pediatrics (AAP). That’s why “we’ve really recommended strongly to avoid cow’s milk for the first year of life,” Kim said. While the vast majority of babies over 6 months will do fine drinking cow’s milk, the foreign protein can cause inflammation through an allergic response in some babies, Kim said.

That allergic response can lead to inflammation in a baby’s gut or microscopic bleeding in their intestinal lining, according to Kim. And the lack of iron in cow’s milk can lead to anemia. Overall, it can result in babies being unwell or not thriving, he said.

This risk is lower in older infants who, starting around 4 to 5 months, eat more than just formula, Kim added. Because milk isn’t their only source of nutrition, they are more likely to get adequate nutrients elsewhere. Plus, older babies have a more mature gut, kidneys and immune system to tolerate the new proteins. But because newborns and young infants consume only milk, it’s more important for them to receive a very careful formulation like breast milk or infant formula, Kim said.

However, cow’s milk for infants under age 1 “is not ideal and should not become routine,” the AAP said. It is a better option, though, “than diluting formula or making homemade formula,” according to the AAP.

—Why do babies barely blink?

—Why do babies lose their hair?

—What happens when a baby takes its first breath?

In cases in which supplementing with cow’s milk for a short period of time may be necessary, such as the 2022 infant formula shortage in the U.S., transition to cow’s milk slowly if you can, so that it doesn’t shock the baby’s system, Kim said. And be mindful of signs and symptoms of any inflammatory or allergic reaction, he added. Babies likely won’t have an immediate reaction to the cow’s milk, but instead they may gradually start to spit up or have diarrhea more often. Worst-case scenario, there could be some blood in their stool due to colitis, an inflammation in the colon. Or they can become swollen, particularly their face, and anemic from protein loss in the blood, he said.

For babies who have already had a dairy aversion or who need a special formula that contains only broken-down proteins or amino acids, dairy milk before they’re a year old probably won’t be suitable. And plant-based milks, which are much lower in nutritional content, are not an adequate nutritional substitute for any baby, Kim said. But for the vast majority of infants 6 months and older, the addition of cow’s milk shouldn’t cause a problem, he said. If you do have concerns about what your baby should be drinking, the AAP advises that you talk with your pediatrician.

This article is for informational purposes only, and is not meant to offer medical advice.

Donavyn Coffey is a Kentucky-based health and environment journalist reporting on healthcare, food systems and anything you can CRISPR. Her work has appeared in Scientific American, Wired UK, Popular Science and Youth Today, among others. Donavyn was a Fulbright Fellow to Denmark where she studied  molecular nutrition and food policy.  She holds a bachelor’s degree in biotechnology from the University of Kentucky and master’s degrees in food technology from Aarhus University and journalism from New York University.