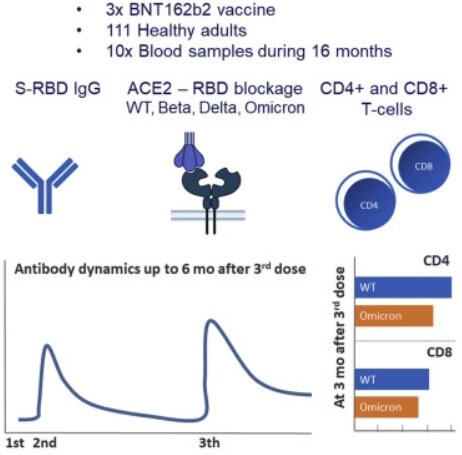 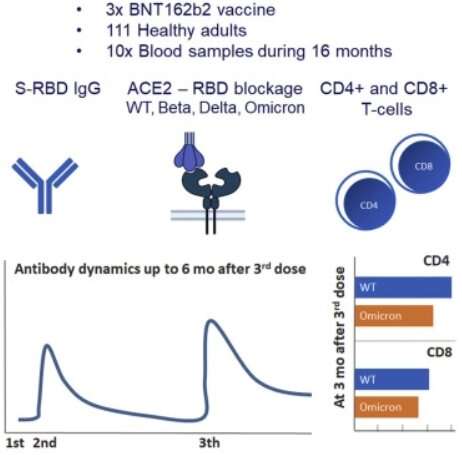 In anticipation of the new wave of COVID-19, Estonia has started to administer the fourth vaccine dose, but many people have not received the third dose yet. A recent study shows that after the third vaccination, the antibody count in the body persists at a higher level than after the second dose.

A collaborative study by researchers of the University of Tartu, Synlab and Icosagen investigated the persistence of antibody levels in approximately one hundred individuals after receiving the third dose of the Pfizer vaccine. After the vaccination, participants in the study gave a blood test, and antibodies and T cells were measured to see whether the person had developed a cellular immune response.

One of the authors of the study Pärt Peterson, Professor of Molecular Immunology at the University of Tartu, said that the longer the period between vaccinations, the bigger the decrease in antibodies. For subsequent vaccinations, it is essential to know how long the immune response lasts. According to the study, the antibody level will significantly increase after the third dose of the vaccine. “Over time, the level decreases and, naturally, such change also occurs after the third dose. However, after six months, the antibody level was still on average six times higher than the level half a year after the second dose of vaccine,” Pärt Peterson explained.

At the beginning of the COVID-19 pandemic, the Wuhan strain was circulating, while now it is mainly the omicron strain that causes the illness. Current vaccines achieve a better immune response to the omicron variant, especially after the third dose. The study investigated the ability of antibodies to block the binding of the virus spike protein to the ACE2 receptor in human cells.

“The results showed that the antibodies ability to block the virus spike declines over time. For example, their ability to block the spike protein of the omicron variant circulating since 2022 from binding to the ACE2 receptor had weakened. The main reason for this is the changed structure of the omicron spike protein compared to other virus variants,” Peterson added.

The researchers also looked into the cellular immune response to the virus. The third booster dose significantly affected the formation of memory T cells, i.e., cellular immune response. “97% of the people who had received the third dose had memory T cells. It is a very positive fact as many earlier studies have confirmed that T cells are the most important in preventing severe COVID-19.”