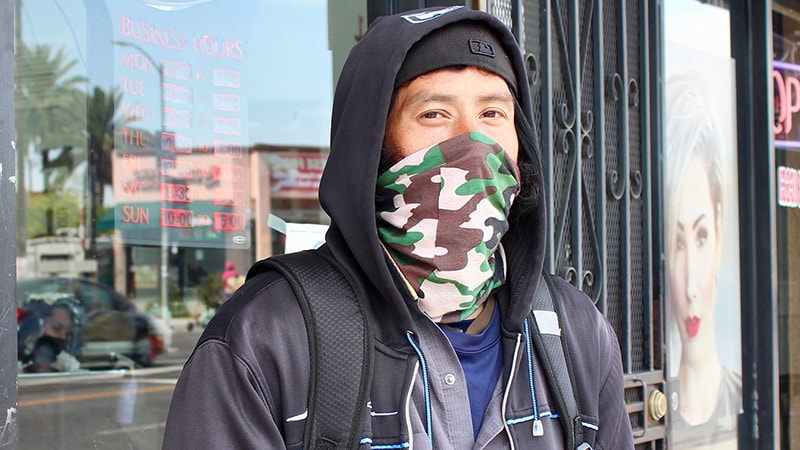 Hispanics who have yet to receive a COVID shot are about twice as likely as non-Hispanic whites or Blacks to say they’d like to get vaccinated as soon as possible, according to a survey released Thursday. The findings hint at fixable, though difficult, vaccine access problems for the population.

One third of unvaccinated Hispanics say they want the shots, compared with 17% of Blacks and 16% of whites, according to the survey released Thursday by KFF. (KHN is an editorially independent program of KFF.) 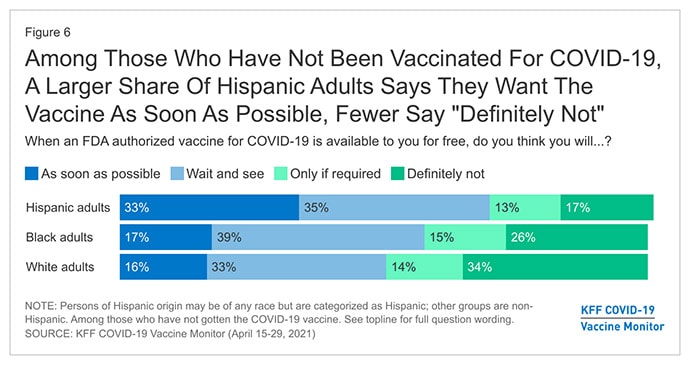 One third of Hispanic adults who haven’t received the COVID-19 vaccination say that they’d like to get it “as soon as possible.” The figure is about twice that of non-Hispanic Black and white groups, and suggests that targeting Hispanics for vaccine education and outreach represents a major opportunity to raise overall vaccination rates. (KFF)

The results reflect an opportunity for public health departments and local governments to reach out to Hispanics with information and vaccinating teams, said Liz Hamel, vice president and director of public opinion and survey research at KFF and director of the organization’s monthly COVID vaccine surveys.

“There definitely is a large chunk of the Hispanic population that’s eager to get it, but they just have either not been able to fit it into their schedule, or they have some concerns or questions or they haven’t been able to access it,” Hamel said.

According to the Centers for Disease Control and Prevention, only about 13% of people in the US who have received at least one vaccine dose are Hispanic, though they make up about 17% of the overall population. (Only about half of the CDC’s data includes the race or ethnicity of vaccinated individuals.)

Among unvaccinated Hispanics, 64% were worried about missing work because of vaccine side effects, and 52% were concerned about having to pay for the shots — although the shots are offered at no cost. These numbers are even higher for Hispanics who lacked lawful permanent resident status. 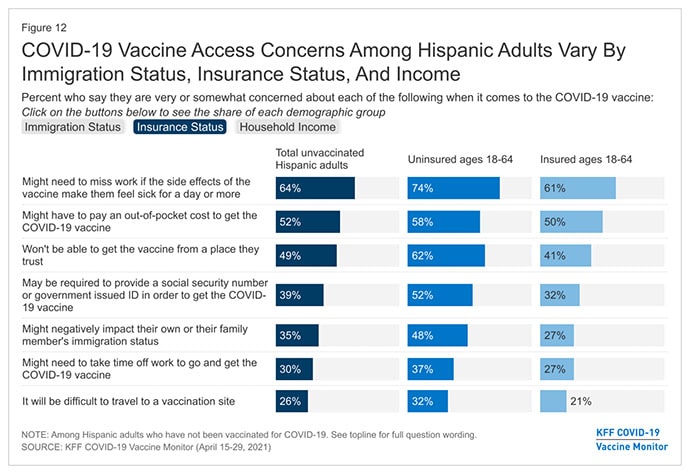 Among Hispanics who are unvaccinated, the two most commonly cited worries about getting the COVID-19 vaccine are the possibility of having to miss work to recover from side effects and the worry that they could be charged for the shots. (KFF)

“It’s hard for somebody who lives day-to-day to take off half a day to come to a clinic and try to get a vaccination,” said Dr. José Pérez, chief medical officer of the South Central Family Health Center, a nonprofit health organization with clinic locations throughout South Los Angeles. “If they don’t work that day, they don’t earn a living and they don’t eat.”

Those facing immigration issues were more likely to be worried about being asked to show government-issued ID or a Social Security number, according to the KFF survey.

The Trump administration’s anti-immigrant policies scared people away from seeking any public health services, for fear it could jeopardize their immigration status, Pérez said.

“For Americans who are used to having order in their life, and don’t have to be fearful of this or that, this may seem a little bit foreign,” he said. “But for the immigrant community in South LA, these are factors that they deal with on an everyday basis.”

Despite the survey’s hopeful message, Pérez’s organization has administered only a fraction of the doses it has on hand, although it has expanded vaccination sites and now offers a shot to anyone who walks into one of its clinics, Pérez said.

The Biden administration recently announced tax credits for small businesses that give their workers paid time off to get the shot and recover in case of side effects. Providers are not allowed to charge people for the COVID vaccine, and must give out shots regardless of immigration status or health insurance coverage.

In California, where Hispanics make up nearly 40% of the population, 48% of COVID deaths, and 63% of COVID infections, about 32% have received vaccinations. Cases and deaths are especially concentrated in dense, low-income neighborhoods that are majority Latino.

Community health clinics and organizations throughout the state are taking the case for vaccinations to sidewalks, supermarkets, and anywhere else people gather, seeking to ensure people know how to sign up for a shot.

In the ZIP code around South Central Family Health Center’s main site, only 16% of eligible residents had at least one shot as of May 7, according to the California Department of Public Health’s vaccine tracker. Five months into the nation’s vaccination campaign, as the CDC relaxes mask recommendations, the clinic is still pushing the importance of masks because of how few people have been vaccinated, Pérez said.

“Vaccine hesitancy” has become a catch-all excuse to explain low rates of vaccinations among minority populations, but the problem is complex, said Nancy Mejía, chief program officer of Latino Health Access in Santa Ana, California, a nonprofit that contracts with Orange County to bring COVID vaccine to Latinos.

Her group’s community health workers, or promotoras, encounter people who face a wide variety of obstacles to get the shot, she said.

“We hear all of these questions about, ‘Well, I don’t have health insurance,’ or ‘Do I have to pay?’ or ‘I don’t have email, how do I register?'” Mejía said. “When folks talk about hesitancy, we really have to ask what it is that we’re talking about, and not continue to place blame on individuals who actually have really good questions.”

Now that demand for vaccine appointments has plunged, Mejía and her group are focusing more on mobile vaccine events at condominium buildings, swap meets, and parking lots where pedestrians and residents can simply walk up. The events are happening in the evenings after work or on the weekends to make the decision to get vaccinated as easy as possible.

“We’re seeing other places that have been open the entire day and gotten only five people in,” she said. “So, for us being open just a few hours in the evening, and getting over 100 people — that’s a success story.”

Carmelo Morales, a 35-year-old Los Angeles resident, used to count himself among the vaccine skeptical. After talking to friends and seeing posts on Instagram, he feared the shots might be a plot to make people sick. He didn’t see the urgency of getting a shot.

But Morales, who works in a meatpacking plant, has been deeply affected by the cases and deaths he has seen among colleagues and their families over the past year. One day in late April, as he was walking home from work, he noticed healthcare workers at a church near his house packing up after a COVID vaccine event.

He asked if there were any leftover doses, and because his house was nearby, nurses waited for him to run home to get his ID so he could get his first shot.

“I just thought about it and was like, hey, it’d be better just to be maybe on the safer side.”