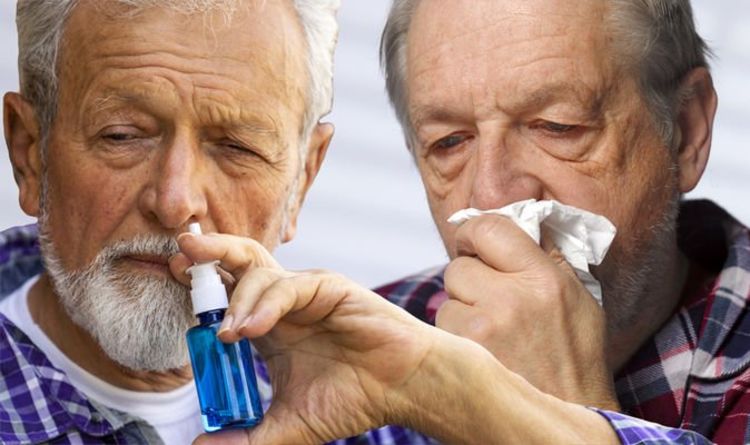 Supplements use is still prevalent in the UK, with many vitamins and minerals promising quick fixes. But ahead of winter, supplements tend to see their popularity grow as Britons attempt to boost weakened immune systems. Zinc supplements are hailed as anti-viral for their ability to prevent and treat flu-like illnesses. But there is evidence that they may also induce loss of sense of smell.

Zinc is a mineral that is essential for the metabolic of cells, playing a key role in immune function, and wound healing.

It “also supports normal growth and development during pregnancy, childhood and adolescence, and is required for proper sense of taste and smell,” according to the National Institutes of Health (NIH).

The mineral is present in a wide variety of products, including some labelled as homoeopathic medications, according to the health body.

However, the NIH points out: “Numerous case reports of anosmia (loss of the sense of smell), in some cases long-lasting or permanent, have been associated with the use of zinc-containing nasal gels or sprays.”

READ MORE: Supplements: The ‘popular’ mineral that raises the risk of ‘high-grade’ cancer by 91%

In fact, the FDA warned against the use of zinc-containing intranasal products in June 2009, after links were established with anosmia.

Following the advice issued by the DFA, the manufacturer recalled the products from the market.

“Currently, these safety concerns have not been found to be associated with cold lozenges containing zinc,” adds the NIH.

These lozenges are typically sold over the counter for the treatment and prevention of colds.

A string of studies have supported the use of zinc to treat and prevent colds, the latest of which was recently released by BMJ.

The meta-analysis set out to investigate the legitimacy of claims pertaining to the benefits of zinc for the prevention and treatment of flu-like illnesses.

The research reviewed more than 1,3000 previous studies, which were whittled down to 28 trials comprising 5,000 study subjects.

In terms of treatment, the researchers didn’t confirm whether subjects had the flu at the outset of each study, nonetheless, zinc supplements proved effective at relieving symptoms.

Many of the studies noted Zinc’s ability to reduce severe signs such as fever and flu-like illness.

In fact, they noted an 87 percent lower chance of severe symptoms among subjects taking zinc.

But the daily average symptoms were similar to those in participants taking placebo, so the data quality of the findings was considered low to moderate.

The study authors, however, noted that zinc supplements were indeed associated with fewer upper respiratory infections.

The study estimated that about 19 of the 100 people with respiratory infections would have completely recovered in the space of one week following zinc treatment.

Harvard Heath wrote: “Also, some people experienced bothersome life effects from zinc, such as upset stomach, nausea, and in some cases, loss of the sense of smell.

“Side effects occurred more often in those taking zinc, versus placebo, including nausea and mouth irritation.

“Fortunately, none were serious. But they might be bothersome enough for some people to stop using zinc.”