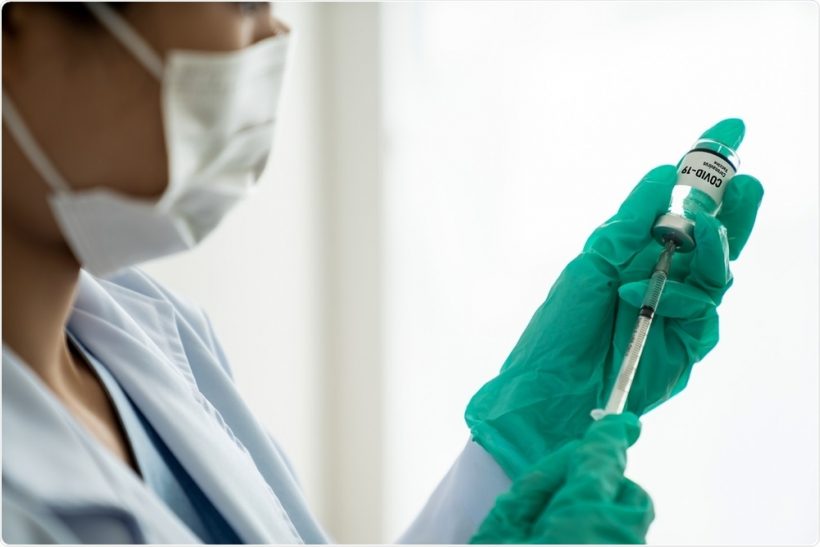 The coronavirus disease 2019 (COVID-19), which is caused by the severe acute respiratory syndrome coronavirus 2 (SARS-CoV-2), originally emerged in Wuhan, China in December 2019. Since then, SARS-CoV-2 has infected over 226 million and caused the deaths of over 4.6 million worldwide.

A new paper published on the preprint server medRxiv* describes the antibody responses in people who have already been infected with SARS-CoV-2 at some point, and are then vaccinated, as compared to those who are naïve to the virus. The study findings suggest that one dose of a vaccine with high efficacy may be sufficient to protect the previously infected; however, this recommendation may need to be fine-tuned according to the lifestyle and severity of the illness in each person. 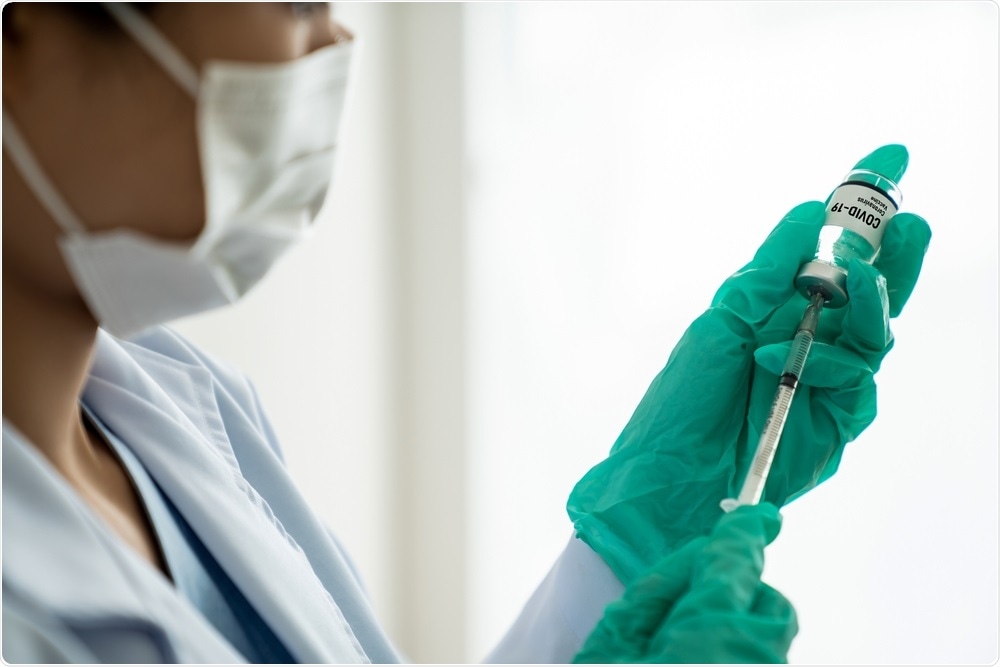 The widespread rollout of COVID-19 vaccines significantly reduced hospitalizations and mortality in several developed countries. The first vaccines to receive emergency approval were the Pfizer/BioNTech (BNT162b2) and Moderna (mRNA-95 1273) vaccines, both of which are based on messenger ribonucleic acid (mRNA) technology that encodes for the viral spike glycoprotein.

Both mRNA vaccines have demonstrated vaccine efficacies of 94% or above after a two-dose regimen in Phase III clinical trials. Real-world effectiveness has also been shown to be high, though the efficacy has decreased against the currently dominant SARS-CoV-2 Delta variant of concern (VOC).

Limited supplies of vaccines in many countries have led to a re-examination of immunization policies in terms of a delayed second dose or putting naïve individuals at a higher priority for vaccination as compared to those with a previous history of natural infection.

Some studies have looked into the adequacy of a single dose for the latter category, in view of current evidence showing that vaccination with just a single dose may still be highly effective for these individuals. This single-dose would act as an excellent booster dose, while two doses might lead to an unduly high level of antibodies.

Such a policy would also free up more doses. However, it is clear that such a step can be taken only if sufficient evidence is available. In fact, most of the earlier studies supporting this practice have been limited as a result of their small sample size.

Of particular concern is the emergence of fast-spreading and often more virulent VOCs, most of which have mutations in the antigenic epitopes that are susceptible to antibody recognition. Sera from convalescent and vaccinated individuals are highly neutralizing against the Alpha variant, but do not demonstrate the same activity against the Beta or Gamma variants.

The Delta variant has spread rapidly to become the dominant strain worldwide. Moreover, recent studies appear to suggest that this variant offers partial resistance, at least, to convalescent and vaccinated antisera.

The current study monitored approximately 580 healthcare workers at a single hospital in Spain for six months. They found that one in five of these workers were seropositive for COVID-19, or had tested positive for SARS-CoV-2 by reverse transcriptase-polymerase chain reaction (RT-PCR) assay, mostly during the first wave.

Immunoglobulin G (IgG) antibodies against the spike protein were present for up to seven months, as were neutralizing antibodies, in most of these individuals. The study subjects were vaccinated with one or two doses of either of the mRNA vaccines, and their antibody response was monitored.

In the 414 participants who were monitored one year from the first visit, over 340 had received two doses of vaccine. Of these healthcare workers, 73%  were female, whereas 22% were on chronic medication. Again, one in five had a history of prior SARS-CoV-2 infection.

Seroconversion occurred in 96% of participants from 10-72 days of the first dose, with IgA and IgG antibodies against the spike, receptor-binding domain (RBD), and the S2 subunit. At 12-19 days from the second dose, all but one participant were seropositive.

After two doses, all participants showed increased binding and neutralizing SARS-CoV-2-specific antibodies, though the titers varied widely. IgG antibodies to the Alpha, Beta, and Gamma spike variants were detected at this timepoint.

The odds of IgM antibodies to the Alpha, Beta, and Gamma spike variants being absent at 2.5, 3.8, and 4.7 times higher, respectively, as compared to IgM antibodies against the wild-type virus.

This difference was similar for all three VOCs.

Neutralizing antibody titers after two doses of the vaccine were higher in those with a previous history of infection than naïve individuals, with higher antibody avidity for both IgA and IgG. Both IgG and IgA levels were linked to neutralization titers

Vaccine responses in prior infection

While those who had been infected more than 11 months before vaccination had higher IgA and IgG levels relative to those who were infected later, this difference vanished when the titers were adjusted for the time between infection and vaccination.

Prior symptomatic infection was associated with higher IgA and IgG antibody titers after full vaccination as compared to those who experienced asymptomatic infection for both the wildtype and VOCs. Neutralizing capacity was also higher. The opposite association was observed with IgM antibodies.

A close association with antibody levels both pre- and post-vaccination, especially IgG and IgA titers, was observed, while the antibody response after the first and second doses correlated well with each other.

The Moderna vaccine was found to induce stronger IgG and IgA titers against the spike, RBD, and S2, with increased neutralizing capacity and avidity, after two doses than the Pfizer vaccine, against both the wildtype and VOCs. 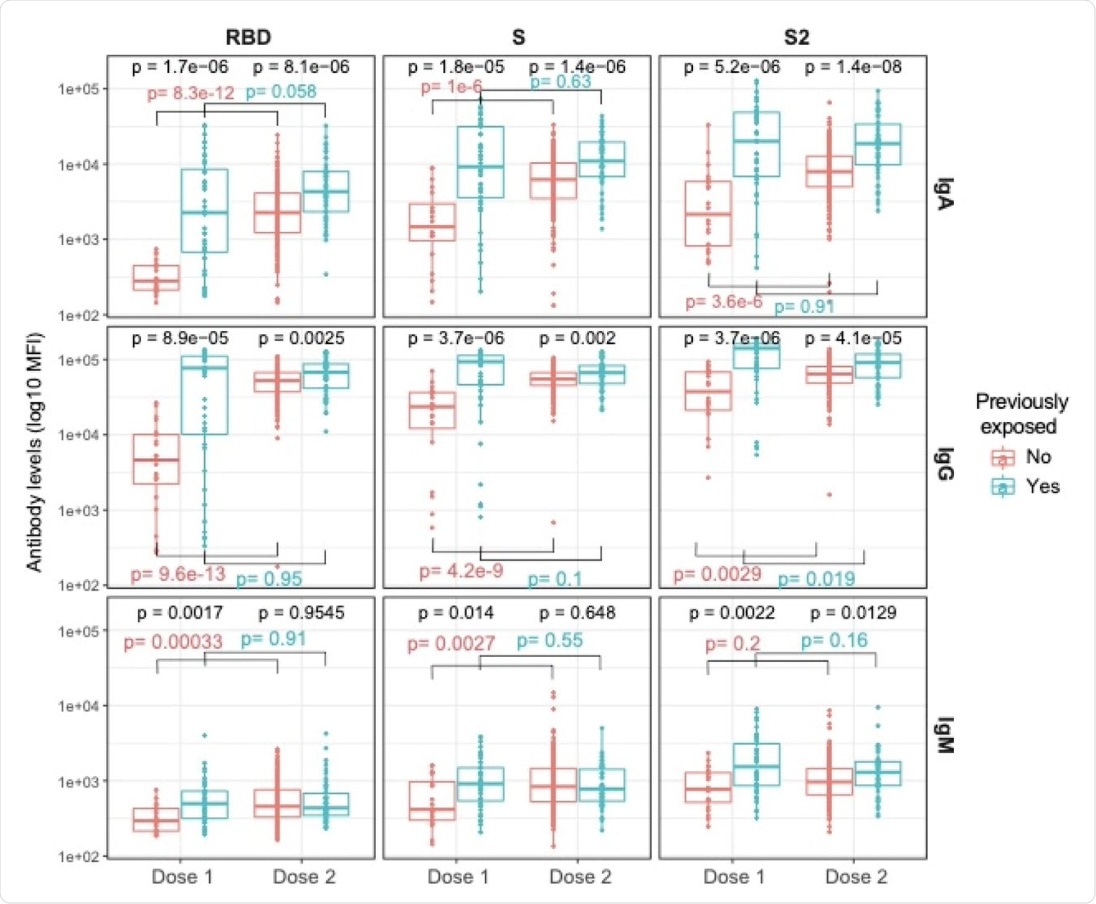 Plots show IgA, IgG, and IgM levels (log10 MFI) against the receptor-binding domain (RBD) of the SARS-CoV-2 Spike glycoprotein (S), the S protein and its subunit S2 after 1 dose (N=64, 20 naive and 44 pre-exposed) and 2 doses (N=263, 211 naive and 52 pre-exposed). Post-vaccination samples analyzed were those collected >7 days after the 1st dose and 2 weeks after the 2nd dose. The center line of boxes depicts the median of MFIs; the lower and upper hinges correspond to the first and third quartiles; the distance between the first and third quartiles corresponds to the interquartile range (IQR); whiskers extend from the hinge to the highest or lowest value within 1.5 × IQR of the respective hinge. Wilcoxon rank test was used to assess statistically significant differences in antibody levels between naive and pre-exposed participants for a same dosage, and between 1st and 2nd dose into each group. We selected all dilutions at 1:500 to make levels comparable.

Adverse effects after vaccination were also associated with higher IgA and IgG levels for wildtype and VOCs, relative to minor or no adverse effects, after one or two doses. The presence of these side effects was also linked to more potent neutralizing capacity and binding avidity.

Smoking was associated with a 43% lower antibody response to one dose of either vaccine. After two doses, the presence of other underlying conditions in individuals who received the Pfizer vaccine was linked to a 45% and 30% weaker antibody response.

Antibody levels against any spike antigen remained detectable for up to a year, while those against the nucleoprotein rapidly waned to below the detectable limit. In exposed individuals, IgG levels remained positive in 90% of tests. 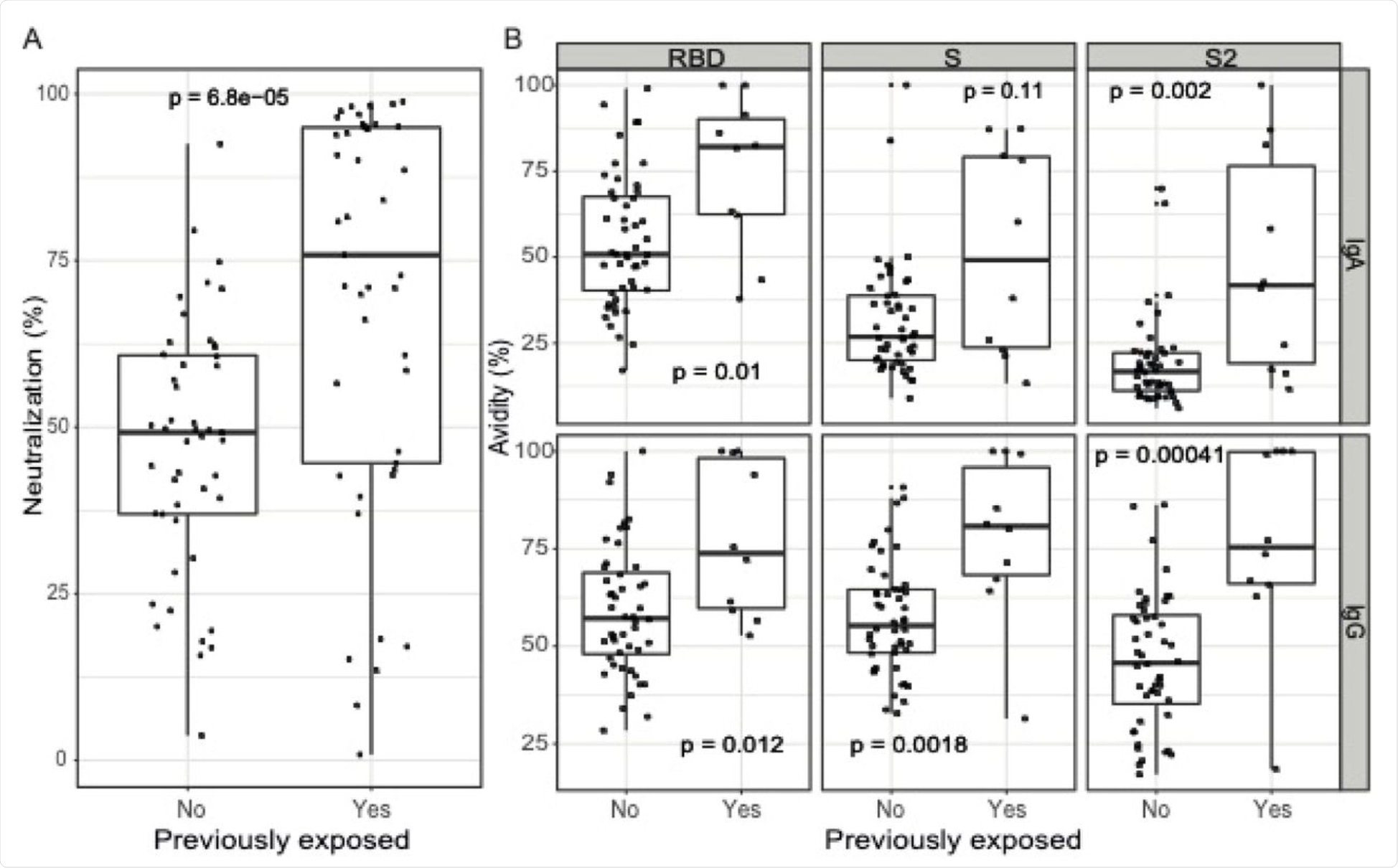 A) Antibody neutralizing capacity, as a percentage of RBD-ACE2 binding inhibition by plasma samples assayed at 1:400 dilution (N=92, 47 naive and 45 pre-exposed). B) Antibody avidity, as % of IgA and IgG levels against RBD, S and S2 antigens measured incubating samples with a chaotropic agent over the IgA and IgG levels measured in the same samples without a chaotropic agent, all at 1:5000 dilution (N=58, 48 naive and 10 pre-exposed). The center line of boxes depicts the median of MFIs; the lower and upper hinges correspond to the first and third quartiles; the distance between the first and third quartiles corresponds to the interquartile range (IQR); whiskers extend from the hinge to the highest or lowest value within 1.5 × IQR of the respective hinge. Wilcoxon rank test was used to assess statistically significant differences in antibody neutralization and avidity between naive and pre-exposed participants.

Importantly, the second dose of the vaccine did not cause much increase in the antibody levels in those with a history of prior infection. This could support the policy of a single vaccine dose for such individuals, except for those with comorbidities, smokers, or who had an asymptomatic infection.

“Based on our data, it is difficult to recommend how long previously exposed individuals could wait to get vaccinated, although receiving at least a dose of a mRNA vaccine if previously exposed clearly increases antibody levels and neutralizing capacity regardless of the time since infection.”

The difference between the two vaccines, in terms of antibody neutralization and avidity, suggests that a slightly longer interval between doses, as with the Moderna vaccine, may increase the antibody response.

The current study underpins the efficacy of mRNA vaccines in the real world. However, further evidence is still needed to determine the duration of immunity and vaccine efficacy against VOCs, as well as the optimal interval between doses. The heterogeneous responses between exposed and naïve individuals must also be studied further.

medRxiv publishes preliminary scientific reports that are not peer-reviewed and, therefore, should not be regarded as conclusive, guide clinical practice/health-related behavior, or treated as established information.