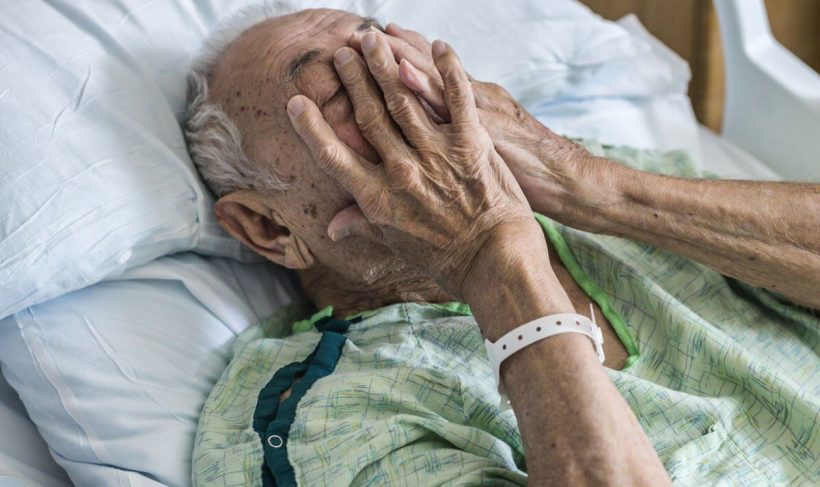 Carotid artery disease describes an accumulation of fatty deposits in the blood vessels supplying the brain with nutrient-rich blood. The condition is one of the most significant precursors for stroke, but rarely produces signs until the artery has become severely blocked. At this stage, a person may experience disturbances to their vision after eating a large meal.

The carotid arteries are two blood vessels located inside the neck which lead to the brain and head.

Blockages in these vessels can be critical, as blood flow to the brain is intricately linked to almost all of the body’s biological functions.

Unfortunately, symptoms are rare in the initial stages, but temporary loss of vision after ingestion of a large meal has been reported in a small number of cases.

This peculiar condition, known as transient visual loss (TVL) occurs when the blood gets shunted to the mesenteric system, resulting in reduced blood flow to the eye.

The condition is suggestive of “severe” carotid artery disease, meaning a stroke could be imminent.

The vast majority of people will function normally even when one of the carotid arteries is completely blocked.

When the narrowing of the arteries hasn’t yet caused a complete blockage, however, doctors may rely on a revascularisation procedure to treat the condition.

An early case study of a 60-year-old man, reported in the Journal of American Optometric Association, described the peculiar phenomenon of TVL.

The report stated: “A 60-year-old man reported episodes of blurred vision associated with visual aberrations in his left eye for five minutes after eating large meals.

“The patient’s symptoms abated when he ate in smaller quantities and was placed on a regimen of IOP-lowering eye drops.”

The authors added: “Postprandial transient visual loss can occur when blood gets shunted to the mesenteric system gayer eating, leaving the eye hypo-perfused.

“It most commonly takes place in individuals whose ocular perfusion is already compromised by carotid disease, in combination with other vascular conditions that result in the inability to compensate for decreased perfusion to the eye.”

Patients with (TVL) almost always present to hospital after their episodes have resolved, which means their ophthalmologic exams tend to be normal.

Doctors may therefore rely on medical and family history to provide clues to the underlying diagnosis of their symptoms.

If carotid artery disease is suspected, a doctor uses a stethoscope to listen out for a whooshing sound in the arteries.

Another common sign of carotid artery disease is a transient ischemic attack or mini-stroke, which causes symptoms like temporary numbness and confusion.

It should be noted, however, that not all cases of blurred vision after meals are an indication of carotid artery disease.

Sometimes, people report blurry vision after their meals due to a spike in blood glucose, which causes the lens of the eye to swell.

This part of the eye is in charge of focusing light directly onto the retina in order to produce sharp vision.

This is why blurred vision after a carbohydrate-heavy meal is accepted as an early warning sign of diabetes.