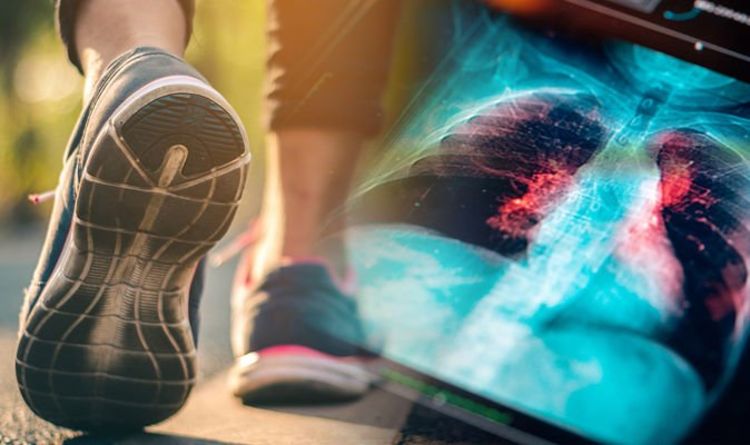 Lung cancer: Signs and symptoms to look out for

Lung cancer is one of the most serious types of cancer to be diagnosed, because it’s usually difficult to spot until it has spread to other parts of the body. That means it’s usually quite advanced before you notice any obvious signs of the cancer.

Lung cancer is also one of the most common types of cancer to be diagnosed in the UK, warned the NHS.

About 45,000 people are told they have lung cancer run the UK each year.

However, many people might not even know they’re at risk of the disease, because symptoms are few and far between in its early stages.

But you could reveal your risk of lung cancer by analysing your walk.

It’s caused by a type of lung cancer affecting the nervous system.

The nervous system is responsible for muscle movement, which is why you might lose your balance easily or feel unsteady.

Balance problems could be accompanied by unexplained dizziness, it added.

“In its early stages, lung cancer doesn’t typically have symptoms you can see or feel,” said WebMD.

“Small-cell lung cancers may tell your immune system to attack your nervous system, which can, in turn, affect how your muscles work.

“It may be hard to stand up when you’re sitting, or you might feel unsteady.

“You could be dizzy from anaemia or from a backup in your superior vena cava, the large vein that moves blood from your head to your heart, if it’s crowded by a tumour in the upper right lung.”

But just because you have balance problems, it doesn’t necessarily mean you have lung cancer.

It could simply be caused by motion sickness, migraines, or a head injury.

If you suddenly lose your balance, it’s more likely to be a sign of nerve damage in the legs, or problems with your vision.

You should speak to a doctor if you’re worried about your balance problems.

A cough is the most common symptom of lung cancer, but it could also cause shortness of breath, chest pain, and subtle voice changes.

The outlook for lung cancer isn’t as good as other types of cancer, because the symptoms are usually only spotted in its later stages.

About one in three patients live for at least a year after their diagnosis, while one in 20 live for another 10 years.

Around 45,000 people are diagnosed with lung cancer in the UK every year.