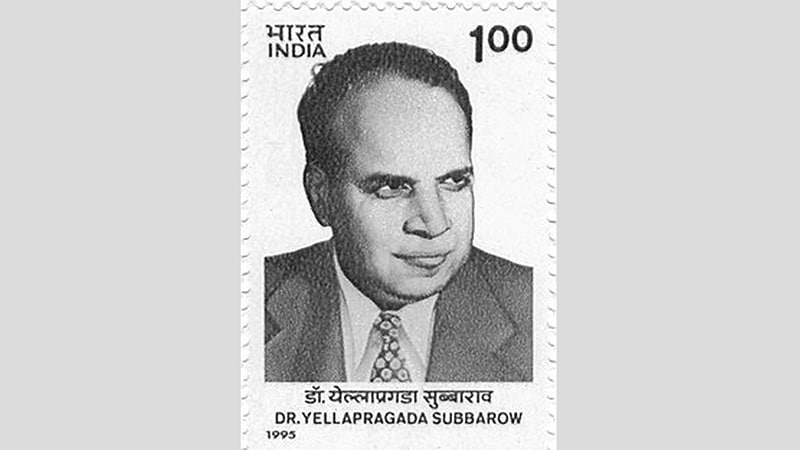 We have a half-forgotten Indian immigrant to thank – a hospital night porter turned biochemist –for revolutionizing treatment of leukemia, the once deadly childhood scourge that is still the most common pediatric cancer.

Dr Yellapragada SubbaRow has been called the “father of chemotherapy” for developing methotrexate, a powerful, inexpensive therapy for leukemia and other diseases, and he is celebrated for additional scientific achievements. Yet SubbaRow’s life was marked more by struggle than glory.

Born poor in southeastern India, he nearly succumbed to a tropical disease that killed two older brothers, and he didn’t focus on schoolwork until his father died. Later, prejudice dogged his years as an immigrant to the United States, and a blood clot took his life at the age of 53.

Scientifically, however, SubbaRow (pronounced sue-buh-rao) triumphed, despite mammoth challenges and a lack of recognition that persists to this day. National Cancer Research Month is a fitting time to look back on his extraordinary life and work and pay tribute to his accomplishments.

No one appreciates SubbaRow more than a cadre of Indian-born physicians who have kept his legacy alive in journal articles, presentations, and a Pulitzer Prize-winning book. Among them is author and oncologist Siddhartha Mukherjee, MD, who chronicled SubbaRow’s achievements in his New York Times No. 1 bestseller, “The Emperor of All Maladies: A Biography of Cancer.”

As Mukherjee wrote, SubbaRow was a “pioneer in many ways, a physician turned cellular physiologist, a chemist who had accidentally wandered into biology.” (Per Indian tradition, SubbaRow is the doctor’s first name, and Yellapragada is his surname, but medical literature uses SubbaRow as his cognomen, with some variations in spelling. Mukherjee wrote that his friends called him “Yella.”) 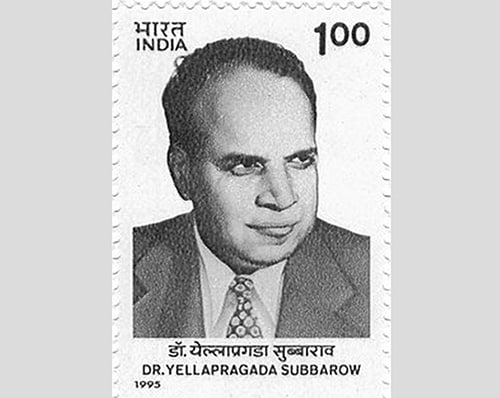 This 1995 postage stamp from India commemorates
the work of Dr Yellapragada SubbaRow.

SubbaRow came to the United States in 1923, after enduring a difficult childhood and young adulthood. He’d survived bouts of religious fervor, childhood rebellion (including a bid to run away from home and become a banana trader), and a failed arranged marriage. His wife bore him a child who died in infancy. He left it all behind.

In Boston, medical officials rejected his degree. Broke, he worked for a time as a night porter at Brigham and Women’s Hospital in Boston, changing sheets and cleaning urinals. To a poor but proud high-caste Indian Brahmin, the culture shock of carrying out these tasks must have been especially jarring.

SubbaRow went on to earn a diploma from Harvard Medical School, also in Boston, and became a junior faculty member. As a foreigner, Mukherjee wrote, SubbaRow was a “reclusive, nocturnal, heavily accented vegetarian,” so different from his colleagues that advancement seemed impossible. Despite his pioneering biochemistry work, Harvard later declined to offer SubbaRow a tenured faculty position.

By the early 1940s, he took a job at an upstate New York pharmaceutical company called Lederle Labs (later purchased by Pfizer). At Lederle, SubbaRow strove to synthesize the vitamin known as folic acid. He ended up creating a kind of antivitamin, a lookalike that acted like folic acid but only succeeded in gumming up the works in receptors. But what good would it do to stop the body from absorbing folic acid? Plenty, it turned out.

Discoveries Pile Up, but Credit and Fame Prove Elusive

SubbaRow was no stranger to producing landmark biological work. He’d previously codiscovered phosphocreatine and ATP, which are crucial to muscular contractions. However, “in 1935, he had to disown the extent of his role in the discovery of the color test related to phosphorus, instead giving the credit to his co-author, who was being considered for promotion to a full professorship at Harvard,” wrote author Gerald Posner in his 2020 book, “Pharma: Greed, Lies and the Poisoning of America.”

Houston-area oncologist Kirtan Nautiyal, MD, who paid tribute to SubbaRow in a 2018 article, contended that “with his Indian instinct for self-effacement, he had irreparably sabotaged his own career.”

SubbaRow and his team also developed “the first effective treatment of filariasis, which causes elephantiasis of the lower limbs and genitals in millions of people, mainly in tropical countries,” Nautiyal wrote. “Later in the decade, his antibiotic program generated polymyxin, the first effective treatment against the class of bacteria called Gram negatives, and aureomycin, the first “broad-spectrum’ antibiotic.” (Aureomycin is also the first tetracycline antibiotic.)

SubbaRow’s discovery of a folic acid antagonist would again go largely unheralded. But first came the realization that folic acid made childhood leukemia worse, not better, and the prospect that this process could potentially be reversed.

Rise of Methotrexate and Fall of Leukemia

In Boston, Sidney Farber, MD, a Boston pathologist, was desperate to help Robert Sandler, a 2-year-old leukemia patient. Farber contacted his ex-colleague SubbaRow to request a supply of aminopterin, an early version of methotrexate that SubbaRow and his team had developed. Farber injected Robert with the substance and within 3 days, the toddler’s white blood count started falling – fast. He stopped bleeding, resumed eating, and once again seemed almost identical to his twin brother, as Mukherjee wrote in his book.

Leukemia had never gone into remission before. Unfortunately, the treatment only worked temporarily. Robert, like other children treated with the drug, relapsed and died within months. But Farber “saw a door open” – a chemical, a kind of chemotherapy, that could turn back cancer. In the case of folic acid antagonists, they do so by stopping cancer cells from replicating.

Methotrexate, a related agent synthesized by SubbaRow, would become a mainstay of leukemia treatment and begin to produce long-term remission from acute lymphoblastic leukemia in 1970, when combination chemotherapy was developed.

Other cancers fell to methotrexate treatment. “Previous assumptions that cancer was nearly always fatal were revised, and the field of medical oncology (treatment of cancer with chemotherapy), which had not previously existed, was formally established in 1971,” according to the National Cancer Institute’s history of methotrexate. This account does not mention SubbaRow.

Death Takes the Doctor, but His Legacy Remains

In biographies, as well as his own words, SubbaRow comes across as a prickly, hard-driving workaholic who had little interest in intimate human connections. “It is not good to ask in every letter when I will be back,” he wrote to his wife back in India, before cutting off ties completely in the early 1930s. “I will come as early as possible…I do not want to write anything more.”

It seems, as his biographer S.P.K. Gupta noted, that “he was quite determined that the time allotted to him on Earth should be completely devoted to finding cures for ailments that plagued mankind.”

Still, SubbaRow’s research team was devoted to him, and he had plenty of reasons to be bitter, such as the prejudice and isolation he encountered in the United States and earlier, in British-run India. According to Mr. Posner’s book, even as a young medical student, SubbaRow heeded the call of Indian independence activist Mohandas Gandhi. He “refused the British surgical gown given him at school and instead donned a traditional and simple cotton Khadi. That act of defiance cost SubbaRow the college degree that was necessary for him to get into the State Medical College.”

During the last year of his life, SubbaRow faced yet another humiliation: In his landmark 1948 study about aminopterin as a treatment for leukemia, his colleague Farber failed to credit him, an “astonishing omission” as Yaddanapudi Ravindranath, MBBS, a pediatric hematologist/oncologist at Wayne State University, Detroit, put it. “From everything I know, Farber spent the rest of his career apologizing and trying to make amends for it,” Ravindranath said in an interview.

A Career Cut Short, and a Lasting Legacy

In 1948, at the age of 53, SubbaRow suddenly died. “Many think SubbaRow would have won [the] Nobel Prize had he lived a few years longer,” said Ravindranath.

Like SubbaRow, Ravindranath was born in Andhra Pradesh state, near the city of Chennai formerly known as Madras. “Being a compatriot, in a way I continue his legacy, and I am obviously proud of him,” said Ravindranath, who has conducted his own landmark research regarding methotrexate and leukemia.

Nearly 75 years after SubbaRow’s death, Indian-born physicians like Ravindranath continue to honor him in print, trying to ensure that he’s not forgotten. Methotrexate remains a crucial treatment for leukemia, along with a long list of other ailments, including psoriasis.

Recognition for “Yella” may have come late and infrequently, but a Lederle Laboratories research library named after him offered SubbaRow a kind of immortality. A plaque there memorialized him in stone as a scientist, teacher, philosopher, and humanitarian, featuring the quote: “Science simply prolongs life. Religion deepens it.”

By all accounts, SubbaRow was a man of science and faith who had faith in science.