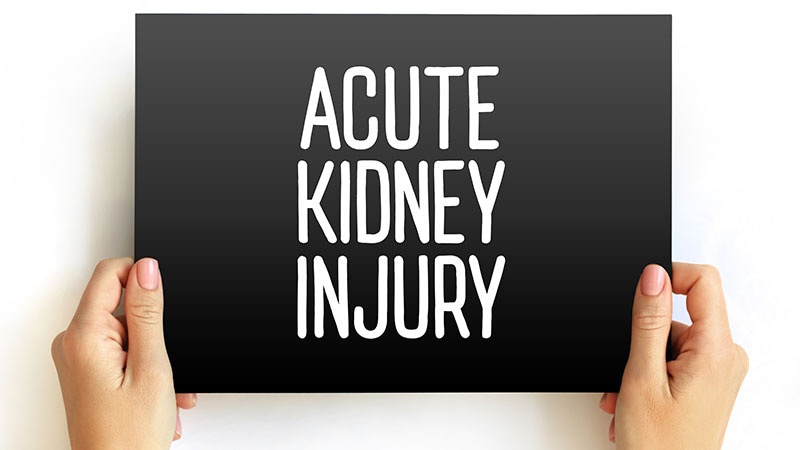 ORLANDO, Florida — Automated alerts sent to clinicians via patients’ electronic health records (EHRs) identified patients with diagnosable acute kidney injury (AKI) who were taking one or more medications that could potentially further worsen their renal function. This led to a significant increase in discontinuations of the problematic drugs and better clinical outcomes in a subgroup of patients in a new multicenter, randomized study with more than 5000 participants.

“Automated alerts for AKI can increase the rate of cessation of potentially nephrotoxic medications without endangering patients,” said F. Perry Wilson, MD, at Kidney Week 2022, organized by the American Society of Nephrology.

In addition, the study provides “limited evidence that these alerts change clinical practice,” said Wilson, a nephrologist and director of the Clinical and Translational Research Accelerator at Yale School of Medicine in New Haven, Connecticut.

“It was encouraging to get providers to change their behavior” by quickly stopping treatment with potentially nephrotoxic medications in patients with incident AKI. But the results also confirmed that “patient decision support systems tend to not be panaceas,” Wilson explained in an interview. Instead, “they tend to marginally improve” patients’ clinical status.

“Our hope is that widespread use may make some difference on a population scale, but rarely are these game changers,” he admitted.

“This was a very nice study showing how we can leverage the EHR to look not only at drugs but also contrast agents to direct educational efforts aimed at clinicians about when to discontinue” these treatments, commented Karen A. Griffin, MD, who was not involved with the study.

A Danger for Alert Fatigue

But the results also showed that more research is needed to better refine this approach, added Griffin, a professor at the Loyola University Stritch School of Medicine and chief of the renal section at the Edward Hines, Jr. VA Medical Center in Hines, Illinois. And she expressed caution about expanding the alerts that clinicians receive “because of the potential for alert fatigue.”

Wilson also acknowledged the danger for alert fatigue. “We’re doing these studies to try to reduce the number of alerts,” he said. “Most clinicians say that if we could show an alert improves patient outcomes, they would embrace it.”

Wilson and associates designed their current study to evaluate an enhanced type of alert that not only warned clinicians that a patient had developed AKI but also gave them an option to potentially intervene by stopping treatment with a medication that could possibly exacerbate worsening renal function. This enhancement followed their experience in a 2021 study that tested a purely informational alert that gave physicians no guidance about what actions to take to more quickly resolve the AKI.

These findings plus results from other studies suggested that “purely informational alerts may not be enough. They need to be linked” to suggested changes in patient management, Wilson explained.

The new study used automated EHR analysis to not only identify patients with incident AKI but also to flag medications these patients were receiving from any of three classes suspected of worsening renal function: nonsteroidal anti-inflammatory drugs (NSAIDs), renin-angiotensin-aldosterone system (RAAS) inhibitors (which include angiotensin-converting enzyme inhibitors and angiotensin-receptor blockers), and protein pump inhibitors (PPIs).

“Our hypothesis was that giving clinicians actionable advice could significantly improve patient outcomes,” Wilson said. “NSAIDs are frequently discontinued” in patients who develop AKI. “RAAS inhibitors are sometimes discontinued,” although the benefit from doing this remains unproven and controversial. “PPIs are rarely discontinued,” and may be an underappreciated contributor to AKI by causing interstitial nephritis in some patients.

The prospective study included 5060 adults admitted with a diagnosis of stage 1 AKI at any of four Yale-affiliated teaching hospitals who were also taking agents from at least one of the three targeted drug classes at the time of admission. Clinicians caring for 2532 of these patients received an alert about the AKI diagnosis and use of the questionable medications, while those caring for the 2528 control patients received no alert and delivered usual care.

The study excluded patients with higher-risk profiles, including those with extremely elevated serum creatinine levels at admission (4.0 mg/dL or higher), those recently treated with dialysis, and patients with end-stage kidney disease.

Overall, a 9% Relative Increase in Discontinuations

In general, the intervention had a modest but significant effect on cessation of the targeted drug classes within 24 hours of sending the alert.

Discontinuations of NSAIDs occurred at the highest rate, in about 80% of patients, in both groups, and the intervention showed no significant effect on stopping agents from this class. Discontinuations of RAAS inhibitors showed the largest absolute difference between group effect, about a 10 percentage point increase that represented a significant 14% relative increase in stopping agents from this class. Discontinuations of PPIs occurred at the lowest rate, in roughly 20% of patients, but the alert intervention had the greatest impact by raising the relative rate of stopping by a significant 26% compared with controls.

Analysis of the effect of the intervention on the combined clinical outcome showed a less robust impact. The alerts produced no significant change in the clinical outcome overall, nor in the use of NSAIDs or RAAS inhibitors. However, the change in use of PPIs following the alerts significantly linked with a 12% relative drop in the incidence of the combined clinical endpoint of progression of AKI to a higher stage, need for dialysis, or death.

The results were consistent across several prespecified subgroups based on parameters such as age, sex, and race, but these analyses showed a signal that the alerts were most helpful for patients who had serum creatinine levels at admission of less than 0.5 mg/dL.

Wilson speculated that the alerts might have been especially effective for these patients because their low creatinine levels might otherwise mask AKI onset.

A safety analysis showed no evidence that the alert interventions and drug cessations increased the incidence of any complications.

Wilson cited two potential explanations for why the tested alerts appeared most effective for patients taking a PPI at the time of admission. One is that PPIs are underappreciated as a contributor to AKI, a possibility supported by the low rates of discontinuation in both the control and intervention groups.

In addition, treatment with a PPI may be a marker of “sicker” patients who may have more to gain from quicker identification of their AKI. For example, 28% of the patients who were taking a PPI at admission were in the ICU when they entered the study compared with a 14% rate of ICU care among everyone else.

The next step is to assess adding more refinement to the alert process, Wilson said. He and his associates are now running a study in which an AKI alert goes to a “kidney action team” that includes a trained clinician and a pharmacist. The team would review the patient who triggered the alert and quickly make an individualized assessment of the best intervention for resolving the AKI.

Mitchel L. Zoler is a reporter for Medscape and MDedge based in the Philadelphia area. @mitchelzoler