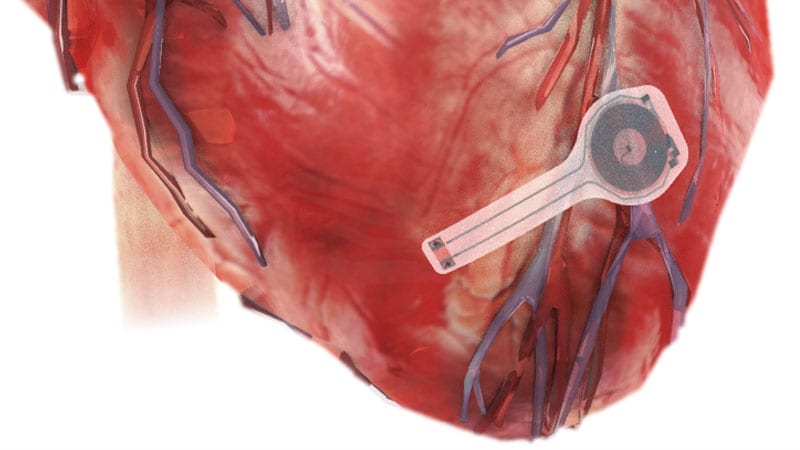 A fully implantable, bioabsorbable pacemaker has been developed that’s capable of sustaining heart rhythms in animal and human donor hearts before disappearing over 5 to 7 weeks.

Temporary pacing devices are frequently used after cardiac surgery but rely on bulky external generators and transcutaneous pacing leads that run the risk of becoming infected or dislodged and can damage the heart when removed if they’re enveloped in fibrotic tissue.

The experimental device is thin, powered without leads or batteries, and made of water-soluble, biocompatible materials, thereby bypassing many of the disadvantages of conventional temporary pacing devices, according to John A. Rogers, PhD, who led the device’s development and directs the Simpson Querrey Institute for Bioelectronics at Northwestern University in Chicago, Illinois. 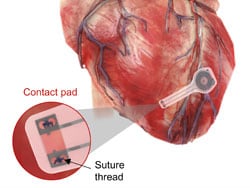 An illustration of the leadless, battery-free pacemaker mounted on the heart.

“The total material load on the body is very minimal,” he told theheart.org | Medscape Cardiology. “The amount of silicon and magnesium in a multivitamin tablet is about 3000 times more than the amount of those materials in our electronics. So you can think of them as a very tiny vitamin pill, in a sense, but configured with electronic functionality.”

Rogers and his team have a reputation for innovation in bioelectronic medicine, recently constructing transient wireless devices to accelerate neuroregeneration associated with damaged peripheral nerves, to monitor critically ill neonates, and to detect early signs and symptoms associated with COVID-19.

Shortly after Rogers joined Northwestern, cardiac electrophysiologist and Northwestern professor of medicine Rishi Arora, MD, reached out to discuss how they could leverage wireless electronics for patients needing temporary pacing.

“It was a natural marriage,” Arora said in an interview. “Part of the reason to go into the heart was because the cardiology group here at Northwestern, especially on the electrophysiology side, has been very involved in translational research, and John also had a very strong collaboration before he came here with Igor Efimov, a giant in the field in terms of heart rhythm research.”

Arora noted that the incidence of temporary pacing after cardiac surgery is at least 10% but can reach 20%. Current devices work well in most patients, but temporary pacing epicardial wires can cause complications and, typically, only work well for a few days after cardiac surgery. Clinically, though, several patients need postoperative pacing support for 1 to 2 weeks.

“So if something like this were available where you could tack it onto the surface and forget it for a week or 10 days or 2 weeks, you’d be doing those 20% of patients a huge service,” he said.

The philosophy of “leave nothing behind” is nothing new in cardiology, with bioresorbable vascular scaffolds (BVS) gaining initial support as a potential solution to neoatherosclerosis and late-stent thrombosis in permanent metal stents. Failure to show advantages and safety concerns such as in-scaffold thrombosis, however, led Abbott to stop global sales of the first approved BVS and Boston Scientific to halt its BVS program in 2017.

The wireless pacemaker, however, is an electrical device, not a mechanical one, observed Rogers. “The fact that it’s not in the bloodstream greatly lowers risks and, as I mentioned before, everything is super thin, low-mass quantities of materials. So, I guess there’s a relationship there, but it’s different in a couple of very important ways.”

As co-authors Rogers, Arora, and Efimov, of George Washington University in Washington, DC, recently reported in Nature Biotechnology, the electronic part of the pacemaker contains three layers: a loop antenna with a bilayer tungsten-coated magnesium inductive coil, a radiofrequency PIN diode based on a monocrystalline silicon nanomembrane, and a poly (lactide-co-glycolide) (PLGA) dielectric interlayer.

The electronic components rest between two encapsulation layers of PLGA to isolate the active materials from the surrounding biofluids during implantation, and connect to a pair of flexible extension electrodes that deliver the electrical stimuli to a contact pad sutured onto the heart. The entire system is about 0.05 mL in width, about 16 mm in length, and weighs in at about 0.3 g.

The pacemaker receives power and control commands through a wireless inductive power transfer — the same technology used in implanted medical devices, smartphones, and RFID tags — between the receiver coil in the device and a wand-shaped, external transmission coil placed on top of or within a few inches of the heart.

“Right now we’re almost at 15 inches, which I think is a very respectable distance for this particular piece of hardware, and clinically very doable,” observed Arora.

Testing thus far shows effective ventricular capture across a range of frequencies in mouse and rabbit hearts and successful pacing and activation of human cardiac tissue.

In vivo tests in dogs also suggest that the system can “achieve the power necessary for operation of bioresorbable pacemakers in adult human patients,” the authors say.

The device was able to successfully pace the dogs through postoperative day 4 but couldn’t provide enough energy to capture the ventricular myocardium on day 5 and failed to pace the heart on day 6, even when transmitting voltages were increased from 1 Vpp to more than 10 Vpp.

Rogers pointed out that a transient device of theirs that uses very thin films of silica provides stable intracranial pressure monitoring for traumatic brain injury recovery for 3 weeks before dissolving. The problem with the polymers used as encapsulating layers in the pacemaker is that even if they haven’t completely dissolved, there’s a finite rate of water permeation through the film.

“It turns out that’s what’s become the limiting factor, rather the chemistry of bioresorption,” he said. “So, what we’re seeing with these devices beginning to degrade electrically in terms of performance around 5 to 6 days is due to that water permeation.”

Although not part of the current study, there’s no reason thin silica layers couldn’t be incorporated into the pacemaker to make it less water-permeable, Rogers said. Still, this will have to be weighed against the competing consideration of stable operating life.

The researchers specifically chose materials that would naturally bioresorb via hydrolysis and metabolic action in the body. PLGA degrades into glycolic and lactic acid, the tungsten-coated magnesium inductive coil into Wox and Mg(OH)2, and the silicon nanomembrane radiofrequency PIN diode into Si(OH)4.

CT imaging in rat models shows the device is enveloped in fibrotic tissue and completely decouples from the heart at 4 weeks, while images of explanted devices suggest the pacemaker largely dissolves within 3 weeks and the remaining residues disappear after 12 weeks.

Images of different stages of bioresorption, which allows the therapy to bypass the need for device removal.

The researchers have started an investigational device exemption process to allow the device to be used in clinical trials, and plan to dig deeper into the potential for fragments to form at various stages of resorption, which some imaging suggests may occur.

“Because these devices are made out of pure materials and they’re in a heterogeneous environment, both mechanically and biomechanically, the devices don’t resorb in a perfectly uniform way and, as a result, at the tail end of the process you can end up with small fragments that eventually bioresorb, but before they’re gone, they are potentially mobile within the body cavity,” Rogers said.

“We feel that because the devices aren’t in the bloodstream, the risk associated with those fragments is probably manageable but at the same time, these are the sorts of details that must be thoroughly addressed before trials in humans,” he said, adding that one solution, if needed, would be to encapsulate the entire device in a thin bioabsorbable hydrogel as a containment vehicle.

Electrophysiologist Arora said they hope the pacemaker “will make patients’ lives a lot easier in the postoperative setting but, even there, I think one must remember current pacing technology in this setting is actually very good. So there’s a word of caution not to get ahead of ourselves.”

Looking forward, the excitement of this approach is not only in the immediate post-op setting but in the transvenous setting, he said. “If we can get to the point where we can actually do this transvenously, that opens up a huge window of opportunity because there we’re talking about post-TAVR [transcatheter aortic valve replacement], post-myocardial infarction, etc.”

Currently, temporary transvenous pacing can be quite unreliable because of a high risk of dislodgement and infection — much higher than for surgical pacing wires, he noted.

“In terms of translatability to larger numbers of patients, the value would be huge. But again, a lot needs to be done before we can get there. But if it can get to that point, then I think you have a real therapy that could potentially be transformative,” Arora said.

Rogers reported support from the Leducq Foundation projects RHYTHM and ROI-HL121270. Arora has disclosed no relevant financial relationships. Co-author disclosures are listed in the original article.