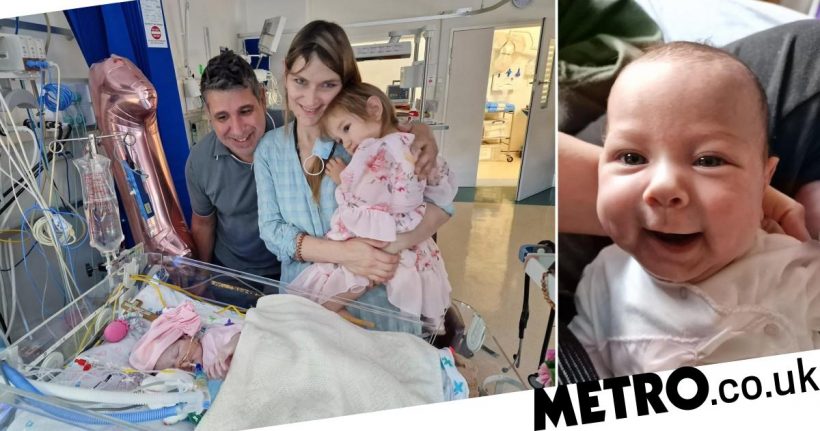 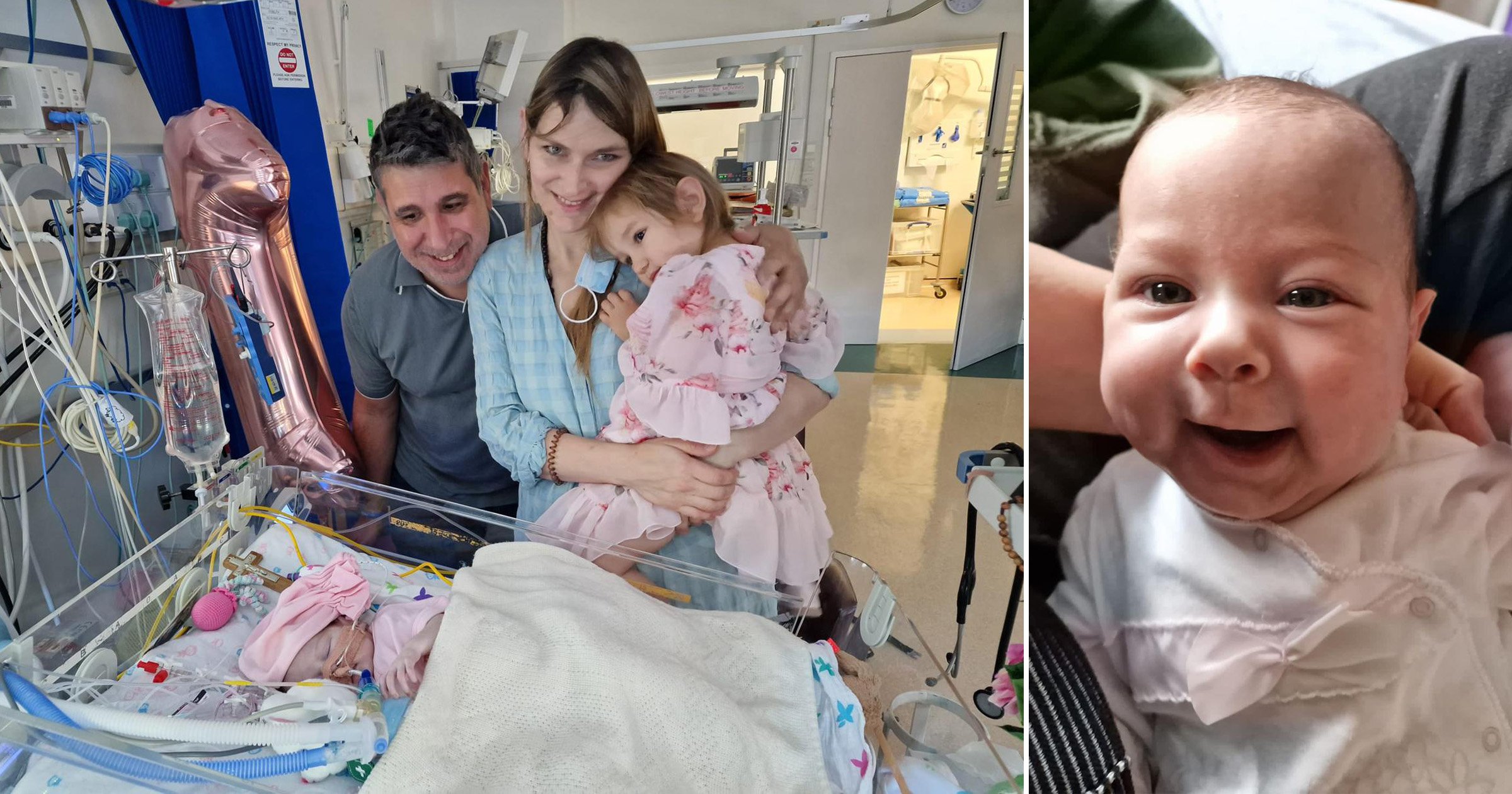 Her unborn child had a serious heart defect, and the advice was to terminate the pregnancy.

Instead, their little girl, Dorothea was born in June 2022, and she began an epic battle for survival.

Despite enduring heart surgery – and a cardiac arrest that lasted for over an hour – the now four-month-old survived against the odds.

‘She fought so hard to be here with us and want to show people to never give up,’ said proud mum, Zofia.

Zofia and Rob, from Sussex, who already have two-year-old Bathsheba together, were overjoyed to find out they were expecting their second child in October 2021.

But the couple’s excitement turned to dismay when a 16-week scan revealed their daughter had hypoplastic left heart syndrome (HLHS) – where the left side of the organ is chronically undeveloped.

Rob said: ‘I had a dream we were having a baby girl and bought the pregnancy test for Zofia – we were so excited.’

Zofia, a homeopath, added: ‘But doctors strongly urged us to terminate the pregnancy because her defect was terrible.

‘But it was never an option for us – we fell in love with her and couldn’t give up on her.’

The doting pair were determined to see the pregnancy through and began looking into treatment options.

They spoke with a specialist foetal cardiologist who said their baby’s heart could be rebuilt when she was three days old.

But another blow was dealt when the 24-week scan revealed Dorothea also had a blockage in her heart.

The only option was to undergo an in-vitro operation that could increase her chances of survival from five percent to 87%.

The pair got to work fundraising for the surgery – which was only available in Texas, USA and cost £2.5 million – but were unable to raise the huge amount of money.

So, at 29 weeks along, they were desperate to find alternative treatment.

That’s when Rob, a former U.S. serviceman, contacted Royal Brompton Hospital – the UK’s largest heart and lung specialist medical centre – who agreed to operate on their baby when she arrived.

Rob said: ‘It was the most complicated case they had ever seen.

‘But said they would give it a go and we remained hopeful.’

Baby Dorothea arrived on June 7, 2022, and Rob says the surgery to reconstruct her heart nearly didn’t go ahead because she had ‘no chance of survival’.

Rob explained: ‘The night before surgery, we were told the doctors were cancelling the op because she wouldn’t survive.

‘The matron said she would have organ failure and be brain dead, but we begged them to go for it.’

Rob said: ‘We managed to get the hospital to overturn the decision, and we prayed she would pull through.’

Dorothea spent 11-hours in surgery as doctors ‘re-wired’ the veins and arteries to function from the right side of her heart.

To everyone’s delight the operation was a success but hours after returning to the ward, she suffered a cardiac arrest.

Zofia said: ‘Doctors came flooding in and trying to bring her back.

‘They were doing CPR for over an hour.

‘It was terrifying but somehow she clung on, and they managed to bring her back.’

Dorothea spent the next six weeks in intensive care with her chest cavity open and hooked-up to a ECMO machine – which works like and artificial heart to pump blood around the body.

Despite all the odds stacked against her, she grew strong enough to move to a regular ward and come off the ventilator on 26th August 2022.

She will need to undergo another operation on her heart at six months old which Zofia and Rob are currently fundraising for, but they’re hopeful for Dorothea’s future.

Rob said: ‘She looks like a healthy baby, and we can’t believe how far she’s come.

‘No doctor or nurse can believe their eyes when they see her.

‘Royal Brompton did what no other hospital dared and we’re forever grateful.

‘We have the most amazing little girl who is thriving – she’s our miracle.’

Zofia added: ‘Seeing her here and thriving has made it all worth it.

Rob said: ‘We really appreciate what we have and are so grateful to everyone here – the doctors and nurses have been so kind to us.

‘Dr. Guido Michielon who operated on her was an absolute angel who has saved so many children’s lives.

‘We never lost hope and never lost faith and it shows the power of love.’